Nearly 200 acres of rich Snoqualmie Valley farmland that was recently threatened with development is now officially owned by King County and will be returned to farming.

Nearly 200 acres of rich Snoqualmie Valley farmland that was recently threatened with development is now officially owned by King County and will be returned to farming. 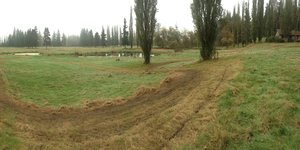 King County purchased the land for $4.54 million, using Conservation Futures Tax funding. Now that the county owns the property it will begin working on returning the land to active farming.

The Tall Chief property was home to one of the first dairy farms in the Snoqualmie Valley, beginning in the early 1900s up into the 1950s, when a golf course was built on the property. The golf course closed in 2009, and developers recently proposed a housing subdivision for the property.

Nearby farmers were worried that building houses so close to working farms would create conflicts and increase the development pressure on their own lands. That’s when King County stepped in to purchase the land, with the intent of returning it back into active farming.

Future farmland acquisition efforts in King County were bolstered earlier this year with an agreement between the City of Seattle and King County to use revenue generated from selling rural development rights to purchase more farmland.

The agreement allows developers in Seattle to purchase 800 rural density credits worth $18 million from farm and forest lands, in exchange for increased development capacity in South Lake Union. These credits will result in the protection of 2,000 acres of farmland and 23,000 acres of forestland.
Earlier this month, King County closed on the sale of $400,000 in density credits to Skanska USA for the developer’s project at 400 Fairview Ave. in the South Lake Union neighborhood This represents the first sale of density credits under the new agreement between King County and Seattle.

King County’s Transfer of Developments Rights program (TDR) is recognized regionally and nationally as the most successful of its kind in the nation since its inception in the late 1990’s, and continues to be an integral tool in the County’s open space and habitat protection efforts.

Over the past decade, TDR has protected more than 141,000 acres of rural and resource lands from development – more than 220 square miles – by steering development of 2,284 potential dwelling units out of King County’s rural landscape and into existing urban areas.