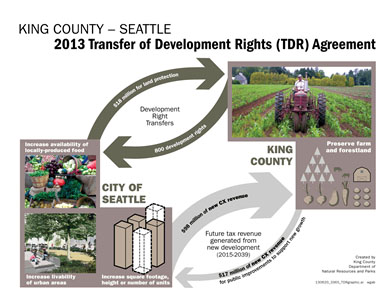 “This is a proven approach that steers development away from farms and forests, and into vibrant city neighborhoods,” said Executive Constantine. “With these transfers of development rights, we can help sustain the production of fresh, local food to supply urban residents, restaurants and retailers for generations to come.”

Under the proposed agreement, developers would purchase 800 urban density credits worth $18 million, which in turn would fund protection of 2,000 acres of farmland and 23,000 acres of forestland. Priority for the funds would be given to protection of active farms that supply Seattle’s farmers markets and restaurants.

In exchange for Seattle’s acceptance of rural development rights, King County would partner with the City on infrastructure investments and public improvements that will support the resulting new growth and increased density. For up to 25 years the County would share with the City 17.4 percent of the new property tax revenue generated by new development in South Lake Union and Downtown, to help pay for an estimated $17 million of “Green Street” improvements on Thomas and Eighth Streets; bike, pedestrian, and transit improvements on Harrison Street, Denny Street, and Third Avenue; and a South Lake Union Community Center.

• By reducing vehicle miles travelled to and from 800 rural homes, the County reduces greenhouse gas emissions by an estimated 173,000 metric tons of carbon dioxide, according to study conducted by The Sightline Institute.

The proposed legislation fulfills the County-City agreement envisioned more than a year ago by Executive Constantine and Seattle Mayor Mike McGinn, and adopted by the Seattle City Council in April, for the rezone of South Lake Union to allow purchase by developers of the 800 urban density credits.

If approved by the Metropolitan King County Council, the partnership agreement would be the first under a 2011 state law that enables cities and counties to partner on efforts linking transfers of development rights with tax increment financing.