An agreement has been finalized for permanent public ownership of 216 acres of forestland on Squak Mountain, following several months of negotiations with the landowner.

King County, The Trust for Public Land finalize agreement with landowner to purchase 216 acres of forestland for public use

An agreement has been finalized for permanent public ownership of 216 acres of forestland on Squak Mountain, following several months of negotiations with the landowner.

King County Executive Dow Constantine and The Trust for Public Land (TPL) announced the agreement, signed July 18, to purchase the forestland for $5 million.

“This is forest that people have cherished for generations and which, thanks to the partnership of The Trust for Public Land, will no longer be threatened, forever to be enjoyed and appreciated,” said Executive Constantine.

“It’s so important to preserve places like Squak Mountain, where back-country nature is still within easy reach of city dwellers,” said Roger Hoesterey, Divisional Director for The Trust for Public Land. “We are delighted to help finalize this agreement.” 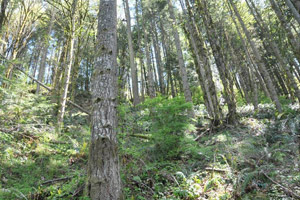 “It's a great day! Squak Mountain's recreational opportunities and diverse habitat will now be preserved for generations to come. This is a true win-win outcome for the region," said King County Councilmember Reagan Dunn. "I would like to commend Executive Constantine and The Trust for Public Land for their leadership on this issue."

“Public outcry about plans to clear cut forestlands on Squak Mountain meant swift action was necessary to preserve this cherished habitat and recreational area adjacent to prized County and State parks,” said Councilmember Larry Phillips, Chair of the Transportation, Economy, and Environment Committee. “I thank The Trust for Public Land for partnering with us to preserve this property.”

Per the agreement, the TPL can close the transaction as early as 2014, and may then hold it until King County has funds to acquire the land as part of the County’s system of parks and open space.

Potential funding sources for the acquisition by King County include Conservation Futures funds collected from property taxes levied throughout King County and its cities and dedicated for purchase and permanent protection of open space lands.

Additional funding could include regional open space acquisition funds in the proposed King County Parks levy, which is on the August ballot to replace the current levy that expires at the end of the year.

A prominent natural feature visible from State Route 900 on the Mountains to Sound Greenway, this part of Squak Mountain has long been used as a private forest camp at the edge of Squak Mountain State Park and Cougar Mountain Regional Wildland Park. 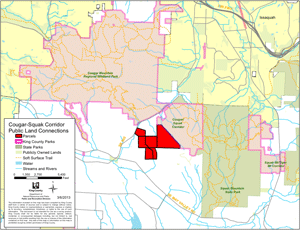 King County is interested in maintaining the land’s recreational opportunities and preserving its rich forest habitat which supports a variety of wildlife and birds, including black bear, cougar and possibly endangered marbled murrelets. The headwaters of May Creek, a seven-mile-long salmon stream that flows into Lake Washington, rise here.