Paving and upgrades over 2.2 miles make the popular trail more accessible to visitors of all ages and abilities 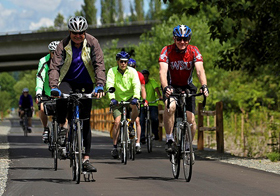 The year-long closure of the East Lake Sammamish Trail through Issaquah is a thing of the past, as the 2.2-mile-long stretch of trail reopened today after a complete makeover.

The second portion of the 11-mile-long trail to be fully developed into a master planned trail, the Issaquah project, from Gilman Boulevard to Southeast 43rd Street, included paving approximately 2.2 miles of 12-foot-wide trail with gravel shoulders, making the trail more accessible to visitors of all ages and abilities.

A former railroad bed, the East Lake Sammamish Trail is the missing link in a 44-mile corridor that stretches from Puget Sound in Seattle to the Cascade Foothills. The next segment to be developed is a 2.6-mile section in Sammamish that will link to the completed trail in Redmond. Construction is anticipated to begin in early 2014. The remaining segment of trail through Sammamish is in design and will be constructed as funding becomes available.

Development of the Issaquah segment of the East Lake Sammamish Trail was made possible with funding from the voter-approved 2008-2013 Open Space and Trails Levy, the Washington Wildlife and Recreation Program, and the federal Congestion Mitigation and Air Quality Program.

The cost of completing the Issaquah segment is $2.9 million.

This project is the second segment of the ELST to be converted from the interim soft-surface trail to the finished master-planned trail. The Redmond segment was completed November 2011, and construction of the next segment in Sammamish (from NE 187th to Inglewood Hill Road) is expected to begin in early 2014.

King County purchased the 11-mile-long East Lake Sammamish rail banked corridor in 1998. An interim soft-surface trail was completed and opened to the public in March 2006.

The ELST follows an historic railroad route along the eastern shore of Lake Sammamish within the cities of Redmond, Sammamish and Issaquah. Part of the “Locks to Lakes Corridor,” the trail follows an off-road corridor along the lake and through lakeside communities.

Once the ELST is fully developed, it will be part of a 44-mile-long regional urban trail corridor from Seattle’s Ballard neighborhood to Issaquah. More information is available at www.kingcounty.gov/eastlakesammamishtrail.