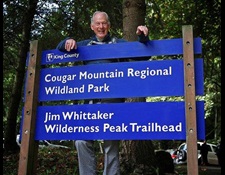 This year marks the 50th anniversary of the Whittaker-Gombu ascent of Mount Everest, when Mr. Whittaker, a Seattle native, became the first American to summit Earth’s highest mountain. It was also Mr. Gombu’s first ascent of Everest.

“It took courage. It took perseverance. It took teamwork,” said Executive Constantine. “It was a half century ago, but their accomplishment will never be dimmed by the passage of time.”

“I am honored to have my name on this wilderness trail, and I encourage people to get outside and enjoy this magical planet,” Whittaker said. “We are blessed to live in the Pacific Northwest.” 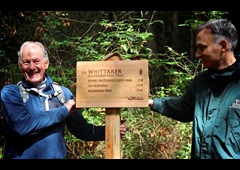 The trails lead to the top of Wilderness Peak in the southeast corner of the park, which at 3,100 acres is the largest park in King County’s system of more than 200 parks.

The trails are among the most highly trafficked and popular in the King County Parks system, with an average of more than 100 hikers a day.

Cougar Mountain is the County’s most popular hiking destination, and serves as a springboard for novice hikers working up to more challenging opportunities within the Cascades and Olympic Mountain ranges. Learn more about King County’s backcountry trails at kingcounty.gov/recreation/parks/trails/backcountry.aspx.