It was an “open space preservation” birthday party of sorts for Washington State Senator Sharon Nelson on Vashon Island today, as she was praised by King County, the Vashon-Maury Island Land Trust and islanders for her work to secure millions of dollars in state funding to acquire critical wildlife habitat and open space since 2013.

Sen. Nelson celebrated in style at Raab’s Lagoon on Vashon Island by announcing an additional $2 million in state funding to acquire open space on Vashon and Maury islands. The funding was secured during an extended state legislative session that wrapped up this week. 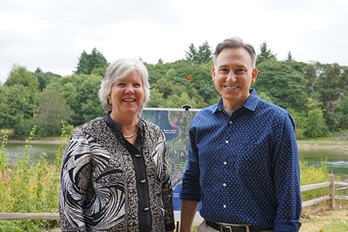 “It’s Sharon’s birthday, but the gift is to all of us,” said King County Executive Dow Constantine. “These are Vashon-Maury Island’s most-valued open spaces, and thanks to the work of all our partners we can now preserve this critical habitat for fish and wildlife.”

“Time and again my friend Sharon Nelson has proven to be one of the greatest advocates for conservation on Vashon," said McDermott. "Through her efforts at the State level, along with those of the Land Trust and King County, we have been able to ensure places like Raab’s Lagoon will remain untouched for the foreseeable future.”

“There is a growing awareness of the special places we have been able to set aside on Vashon Island,” said Dean. “The Land Trust has a vision of a green and healthy future, and we appreciate that our leadership shares that vision.”

In 2013, Sen. Nelson secured $4 million in state funding toward the acquisition of critical wildlife habitat and open space on Vashon/Maury Island. King County partnered with the Land Trust and together have successfully acquired 34 parcels, totaling 142 acres and 1,477 feet of Shoreline with the State and County funds. King County added another $1 million in Conservation Futures Tax and Park Expansion Levy funds toward the effort.

The Vashon Island Conservation Initiative project started with the purchase of 10 acres that include the estuary of Judd Creek, arguably one of the most ecologically significant sites on Vashon Island and certainly the best pocket estuary for juvenile Chinook salmon. Successes include the creation of a new shoreline preserve at Big Beach between Lost Lake and Neill Point, and additions to six other preserves. Two major inholdings were purchased – a 40-acre block in the middle of Dockton Forest, and a 20-acre block sandwiched into Island Center Forest.

This project highlights the vision of a healthy future for the lands and people of Vashon Island, shared by the State of Washington, King County, and the Vashon-Maury Island Land Trust.