In announcing the award, the state Department of Commerce described the Transfer of Development Rights partnership between King County and Seattle as one of the best examples of successful planning in the 25 years since passage of the state Growth Management Act. In only two years, King County has sold $2 million worth of development rights to Seattle developers and protected 12 farms totaling 900 acres. And that’s only the start. 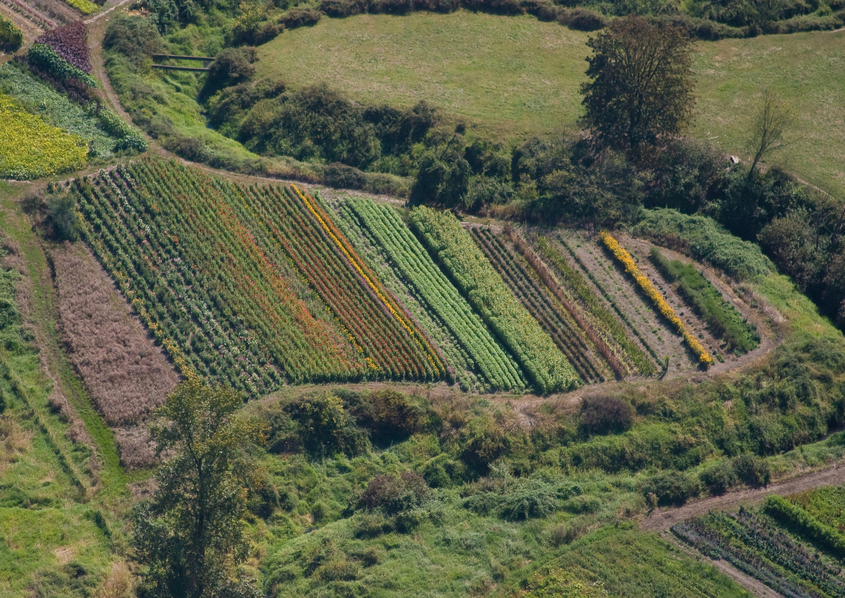 King County’s innovative Transfer of Development Rights (TDR) agreement with the City of Seattle may only be two years old, but its success has already resulted in a growth management Lifetime Achievement Award from Governor Jay Inslee.

“This is a proven approach that steers development away from farms and forests, and into vibrant city neighborhoods,” said King County Executive Dow Constantine. “With these transfers of development rights, we can help sustain the production of fresh, local food to supply urban residents, restaurants and retailers for generations to come.”

The agreement, which requires downtown Seattle developers to purchase farmland development rights in order to build additional office or residential space, was described by the state Department of Commerce as one of the greatest examples of successful planning over the last 25 years of the state Growth Management Act (GMA).

King County also points to the climate change benefits of the agreement, which results in reduced sprawl by transferring development rights into the region’s urban core.

The state Department of Commerce will present King County with the “Lifetime of GMA Achievement Award” at a reception commemorating the 25th anniversary of the GMA, Nov. 13 at the Museum of Glass in Tacoma.

"TDR is a unique and truly excellent tool. This King County-Seattle inter-local agreement also advances the Governor's climate change goals,” said Commerce Director Brian Bonlender. “As implemented, it achieves meaningful reductions in local transportation-related greenhouse-gas emissions by reducing vehicle miles traveled. Specifically, each of the 800 TDRs that will be transferred into the city's urban core from rural and resource lands of the county will reduce greenhouse gas emissions by 270 metric tons - that's a total reduction of 216,000 metric tons of emissions from this partnership."

In 2013, Executive Constantine and Seattle entered into the innovative partnership to protect King County farmlands that supply Seattle and its residents with fresh, locally grown food.

Created in 2001, King County’s TDR program has helped to permanently preserved more than 142,000 acres of open space, forestland and farmland. Forterra and other partners have been instrumental in developing what is considered the strongest land-preservation program in the nation. Forterra’s Landscape Conservation and Local Infrastructure Program provided the framework for development of the recent TDR agreement with the City of Seattle.

The City plans to use the future property tax revenue stream from the County to help pay for an estimated $17 million of “Green Street” improvements on Thomas and Eighth streets; bike, pedestrian, and transit improvements on Harrison Street, Denny Street, and Third Avenue; and a South Lake Union Community Center.

This strategy will yield a reduction of 216,000 metric tons of greenhouse gas emissions over the next 30 years – that’s a significant reduction and equal to the average emissions from 115,000 U.S. residents over the same period of time (Sightline Institute; TDR Report August 2011).

Seattle is one of several cities to partner with King County on TDR; other partner cities include: Bellevue, Issaquah, Sammamish, and Normandy Park. 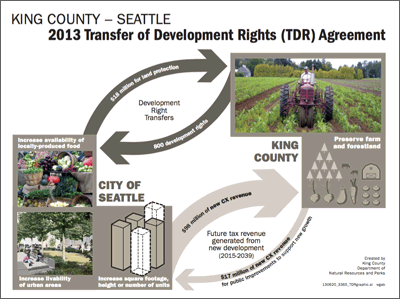 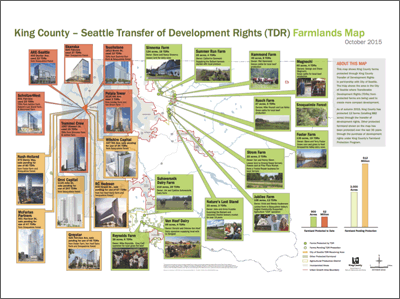