experience a neutral “La Nada” winter weather pattern – neither El Nino nor La Nina – and while the name might imply no significant weather might occur, it is in fact a pattern that historically has meant stronger storms with more flooding across King County.

“Residents living in flood-prone areas would do well to consider keeping a simple emergency kit containing fresh water, flashlights, blankets, and a radio on hand,” said Reagan Dunn, Chair of the King County Flood Control District. “I would also strongly encourage signing up for King County Flood Alerts which can provide you with up to date information about possible flooding near you.”

Scientists note that the currently observed weak El Nino-Southern Oscillation (ENSO) weather pattern over the equatorial Pacific Ocean often increases the variability and frequency of weather extremes in the Pacific Northwest, in both temperature and precipitation, when compared to moderate or strong ENSO years.

While the forecast ahead of the 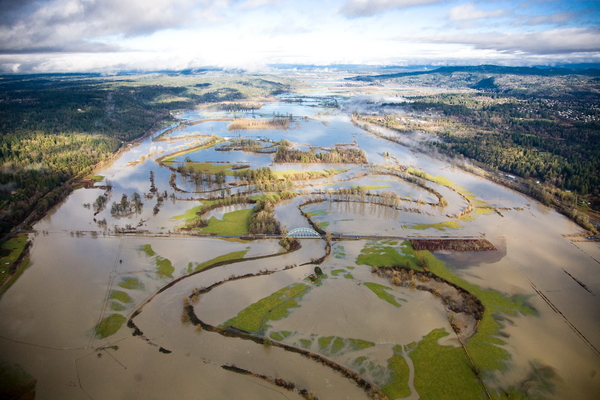 River flooding has led to 12 presidentially declared disasters in King County since 1990.

To prepare for a flood emergency, families can assemble a basic emergency preparedness kit for the home, with items such as a flashlight with spare batteries, a portable radio, non-perishable food, drinking water, and books or games for younger family members.

King County provides information to allow residents the maximum amount of time to prepare for potential flooding on any of King County’s six major river systems, as well as the South Fork Skykomish River in the northeastern corner of the county.

Download the free King County Flood Warning app to your mobile device and subscriber to KC Flood Alerts for your choice of a text, email or phone call alert on any or all county rivers.

Learn more about the app and sign up for KC Flood Alerts at www.kingcounty.gov/flood. This website offers the latest information about river levels and road conditions, plus weather reports and other critical links.

Additional preparations for flood season include:

•    Buying flood insurance now. It takes 30 days for a policy to take effect, and a standard insurance policy will not cover flood damage. Contact your insurance agent or visit www.floodsmart.gov.
•    Monitoring local media for information when severe weather is predicted. Listen for alerts about evacuation routes, and monitor local road conditions and obey closure signs.
•    Minimizing flood damage by storing valuables and electronics higher, and by moving vehicles and equipment to high ground before flood waters rise.
•    Disposing of hazardous chemicals, such as lawn and gardening herbicides, at one of the county’s household hazardous waste sites to help reduce harmful contaminates in flood waters. Learn more at www.kingcounty.gov/hazwaste.

County employees head into the field at designated flood levels to address safety concerns, such as flooded roadways, and to check on flood control facilities.

Questions or assistance with flooding on smaller streams or urban drainage problems can be called in to 206-477-4811 during business hours, or 206-477-8100 after hours or on weekends.

Efforts to protect people and property have earned King County the highest rating of any county in the United States under Federal Emergency Management Agency's Community Rating System (CRS). King County’s high CRS rating is saving policyholders in unincorporated King County more than $1 million in flood insurance premiums – an average of $425 per policy.

The King County Flood Control District is a special purpose government created to provide funding and policy oversight for flood protection projects and programs in King County.  The Flood Control District’s Board is composed of the members of the King County Council. The Water and Land Resources Division of the King County Department of Natural Resources and Parks develops and implements the approved flood protection projects and programs. Information is available at www.kingcountyfloodcontrol.org.