At a ceremonial spike-pulling event Tuesday, King County and its partners celebrated the start of rail removal on two sections of the Eastside Rail Corridor and, more importantly, five miles of new public trail expected to open by the end of the year. 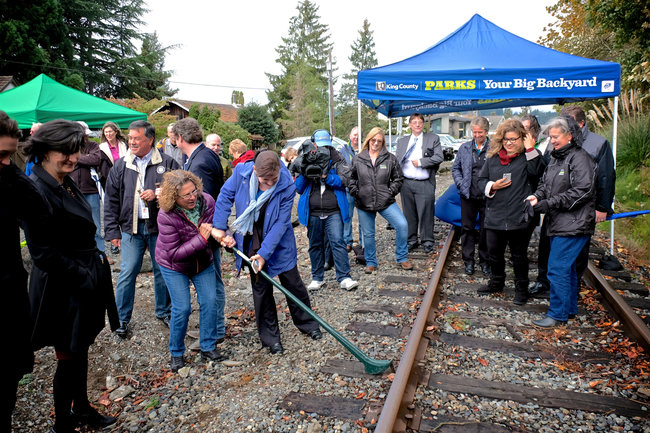 their partners excitedly pulled railroad spikes from the Eastside Rail Corridor (ERC) just north of Gene Coulon Park in Renton Tuesday, anticipating the five miles of new interim gravel trail that is expected to open to the public by the end of 2017.

The spike-pulling event celebrated the start of rail removal on the southern-most four-mile segment of the corridor and a one-mile segment near Kirkland. Rail removal is expected to begin later this month and marks the latest step in preserving and putting to use one of the last unbroken north-south strips of land east of Lake Washington.

“This signals a trail network game changer for King County and it is especially exciting that much of the work is getting started on this four-mile southern segment that includes a long stretch my council district,” said King County Councilmember Reagan Dunn. “When finished, this trail will link to 13 major regional trails, including South County connections to the Lake to Sound Trail, Cedar River Trail and Lake Washington Loop Trail.”

Once complete, the 20-mile corridor will increase non-motorized transportation options and recreational opportunities across East and South King County.

“The trail on the ERC will be the jewel of the Eastside,” said Bill Finkbeiner, Kirkland businessman and former Washington state legislator. “Connecting communities, giving us a place to play, and offering up a great way to be outside."

The ERC – which connects Woodinville, Kirkland, Redmond, Bellevue, and Renton – is owned and managed by King County, the cities of Kirkland and Redmond, Sound Transit, and Puget Sound Energy. The corridor was purchased with the goal of developing a shared, uninterrupted multi-use corridor through the spine of east King County.

• A four-mile section from Gene Coulon Park in Renton to Newcastle Beach Park in Bellevue, with connections at either end to the existing Lake Washington Loop Trail and eventually to the Lake To Sound Trail.

The Eastside Rail Corridor was purchased with the goal of developing a shared, uninterrupted multi-use corridor through the most-populated portion of east King County and north into Snohomish County. The development of a regional trail for recreation and non-motorized transportation is one of the key uses envisioned for the corridor, alongside transit and utilities in areas where they are planned by partner agencies.

Freight and other rail use on all but a mile of the Redmond spur were discontinued several years before the County’s acquisition. The condition of the old rails, ties, ballast, drainage structures, and other equipment in these unused portions is poor and requires costly maintenance.