Another stretch of King County’s 11-mile-long East Lake Sammamish Trail has been transformed from a gravel-surfaced interim path to a paved regional trail that features significant safety upgrades. 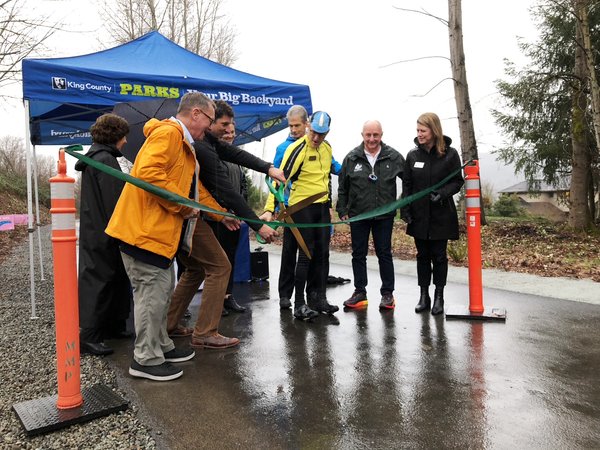 accessibility are among the benefits East Lake Sammamish Trail (ELST) users will enjoy along a 1.2-mile-long stretch of King County trail that has reopened following a complete redevelopment in south Sammamish.

“We are transforming the scenic East Lake Sammamish Trail, making it safer for pedestrians, runners, and cyclists to enjoy,” said King County Executive Dow Constantine. “The redeveloped section in south Sammamish is the latest milestone in our work to create a world-class trail system that connects our region.”

The trail includes a 12-foot-wide asphalt surface with 2-foot-wide gravel shoulders on each side of the paved pathway, plus concrete sidewalk connections, retaining walls, fencing and signage. Wetland mitigation planting and landscaping were also done along the trail.

The completed trail is safer than the interim trail, thanks to its even surface, improved sightlines, enhanced intersections, and improved drainage.

Construction costs are estimated at $4.6 million, and are funded in part by the 2014-19 Parks, Trails, and Open Space Replacement Levy in addition to $1.25 million in grant funding from federal and state sources.

King County purchased the 11-mile-long East Lake Sammamish rail-banked corridor in 1998, opened the gravel-surfaced interim trail in 2006, and has been working since then to complete a master-planned regional trail. The trail stretches from Lake Sammamish State Park to the County’s Marymoor Park.

Just 3.6 miles of interim gravel-surfaced trail are left for redevelopment along the trail, from Southeast 33rd Street to Inglewood Hill Road. King County has submitted permits to the City of Sammamish for construction of this final remaining stretch of interim trail.

The ELST follows a historic railroad route along the eastern shore of Lake Sammamish. At its southern end, the trail links to King County’s Issaquah-Preston Trail. At its northern end, the ELST links up with the Marymoor Connector Trail in Marymoor Park, which in turn connects to the Sammamish River Trail.

Once the ELST is fully developed, it will be part of a 44-mile-long regional urban trail corridor from Seattle’s Ballard neighborhood to Issaquah. More information is available at kingcounty.gov/eastlakesammamishtrail.