The King County Flood Control District (District) approved the Green River System-Wide Improvement Framework (SWIF) in March 2019 and it was accepted by the United States Army Corps of Engineers (Corps of Engineers) in September 2019.

The Green River SWIF outlines a prioritized strategy to address levee deficiencies in order to optimize flood risk reduction, address system-wide issues, and maintain eligibility for the 17 miles of levees currently enrolled in the Corps of Engineers’ Levee Rehabilitation and Inspection Program under Public Law 84-99 (PL 84-99).

The SWIF includes a suite of actions to address levee deficiencies and system-wide issues including:

Regional considerations related to capital project design, repairs, levee operation and maintenance, including the management of vegetation, are also included as part of the SWIF and supporting appendices.

Many of the levees and revetments along the Lower Green River were originally constructed in the 1950s to only protect agricultural lands. Since that time, significant regional economic infrastructure, businesses and residential land uses have been implemented. The level of flood protection the existing levees and other flood facilities provides varies. And the levees often have over steepened side slopes that are subject to erosion. There were also many items identified through levee inspections that needed to be resolved. Additionally, studies by the Corps of Engineers in 2012 concluded that the Howard Hanson Dam, located near the headwaters of the Green River, can only control a 140-year flood event rather than the previously assumed 500-year level of protection. 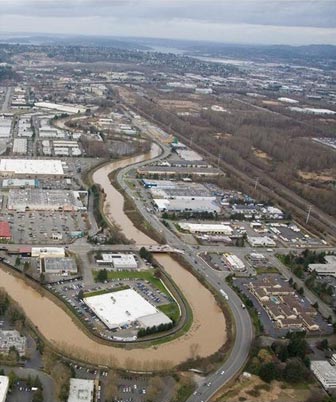 Local jurisdictions throughout the Green River basin are responsible for:

The Corps of Engineers established a SWIF policy in 2011 for non-federal levee sponsors to plan and implement levee improvement actions which may require a longer term comprehensive approach in order to address competing federal mandates and legal requirements that apply to levee systems and the riverine environment in which they're located.

In February 2013, the Corps of Engineers approved the District's Letter of Intent (2MB, PDF) to complete a SWIF for the Green River within a three-year timeframe to address levee inspection items and to plan for longer term levee improvements.

An Interim Green River SWIF (Interim SWIF) was approved by the District and submitted to the Corps of Engineers in February 2016 to meet the required timeline. The Corps of Engineers accepted the Interim SWIF in March 2017. As part of the SWIF, a provisional level of protection of 18,000 cubic feet per second (500-year flood) plus three feet of freeboard was approved for planned capital projects. The Interim SWIF focused on addressing levee inspection items and specified broader objectives, identified by stakeholders who participated as SWIF advisors, that would best be achieved through a long-range planning process that includes a State Environmental Policy Act (SEPA) environmental impact statement.

The Interim SWIF provided continued eligibility for levee rehabilitation assistance for two years and granted the District, as sponsor, the ability to finalize the SWIF and begin implementation of identified activities. For additional information, please visit the King County Flood Control District website.

The King County Flood Control District convened a collaborative interagency and advisory process to support preparation of the Interim SWIF. Many constituent interests contributed to the technical products that informed the Interim SWIF.

The Flood District convened two advisory groups to inform the preparation of the Green River SWIF:

Council and committee members were engaged early and ongoing throughout the preparation of the Interim SWIF. Each group’s meetings were open to the public and organized to provide timely input and recommendations to the project in support of product development and District decision-making at critical project junctures. Project partners and advisors include representatives from the following organizations

Development of the Lower Green River SWIF was guided by six project goals, as determined by the project’s advisory groups and consistent with the 2013 Letter of Intent. A motion to approve the SWIF vision and goals was approved by the King County Flood Control District Executive Committee on Jan. 27, 2014.

The Green River SWIF is funded by the King County Flood Control District and a $300,000 grant from the State of Washington through Puget Sound Partnership (external link).