Honorable Board of Commissioners
County of King, Washington

As provided under the terms of an agreement authorized by Ordinance No. 85375 of the city of Seattle on July 30, 1956 and executed August 29, 1956, we have completed the necessary engineering studies and are submitting herewith a report on a long-range program of sewerage and drainage improvements for the metropolitan Seattle area.

For convenience in presentation, the report is divided into six parts. Of these, Parts I and II are devoted to general, historical and background information; Part III to existing facilities and problems; Part IV to technical aspects of sewerage and drainage planning; Part V to alternative projects, stage construction programs, and financing procedures; and Part VI to a summary of findings and a list of recommendations.

As set forth in the report, construction of the proposed sewerage improvements is scheduled to take place in three stages, with the first stage to begin as soon as necessary financing can be arranged. Improvements called for under Stage I are estimated to cost a total of $83,215,000. This total includes (1) $46,810,000 for facilities which, primarily, will serve the city of Seattle; (2) $30,391,000 for facilities which will serve areas bordering the east and south shores of Lake Washington; and (3) $6,014,000 for small systems along Puget Sound and for temporary treatment works in isolated inland sections of the metropolitan area.

Because much of the metropolitan area is as yet undeveloped, it is not possible at present to prepare a comprehensive drainage plan for the entire area. To provide a basis for the planning of drainage improvements and for determining their approximate costs, unit costs were developed for each of five categories or types of areas. In that manner, it was estimated that the ultimate cost of constructing storm drainage facilities to serve the metropolitan area outside Seattle will approximate $145 million.

Seattle itself is faced with a continuing program of storm water separation to prevent overloading of local and trunk collection systems. An analysis of a representative number of areas indicated that necessary relief of combined sewers could be achieved generally by partial separation. At an average estimated cost of $1,860 per acre, the total cost of partial separation will approximate $69 million. This cost, as well as all others given in the report, is based on present prices and makes no allowance for possible future increases.

A preliminary review of the financing problem indicates that the proposed sewerage improvements can be financed by means of revenue bonds, supported solely by sewer service charges. The extent to which present service charges will have to be increased for such a purpose will depend upon financial and related conditions prevailing within the various participating agencies and on market conditions at the time the bonds are issued. For household connections, the resulting increase in present service charges may vary from a modest amount to as much as $2.50 per month.

Finally, we are firmly convinced that the provision of service on a metropolitan and watershed basis represents the only practicable and certainly the most economical solution to the sewerage and drainage problems of metropolitan Seattle. We are equally convinced that such a program will require the formation of a central agency vested with authority to construct and to operate and maintain all of the proposed facilities. 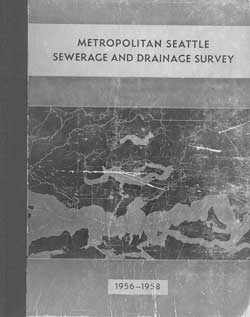 Seattle in 1878, about the time the city's first sewerage system was being planned.