Better than promised: an informal history of the municipality of metropolitan Seattle

by Bob Lane
for the King County Department of Metropolitan Services, 1995

As a Seattle Times reporter, Bob Lane earned his first byline on a Metro story in 1965. He covered Metro until its merger with King County in 1994.

Covering the struggle for clean water was one of my most interesting and challenging assignments as a reporter for the Seattle Times. While the ethics of journalism required me to be objective in covering clean-water issues over many years, I can say now—12 years after leaving The Times—that it was exciting and rewarding to see the public, community groups and local government work together for a common good.

Looking back over Metro's more than three decades of service to the Seattle-King County region, I am struck by the sense of pride exhibited by the men and women who staffed the agency. Employees took great pride in their jobs, pride in their accomplishments and pride in their community. And rightly so. Never before had local government taken on such critical regional challenges and responsibilities. And never before had government responded like Metro did.

Metro wasn't just another place to work; it was a place where caring people could make a difference in the area's quality of life. Clean water. Efficient and affordable public transportation. These two forces drove the Metro mission and motivated Metro employees.

From the cleanup of Lake Washington and Elliott Bay to the development of the regional transportation system, Metro always delivered. And Metro never forgot its responsibility to the public whose tax dollars supported the agency's services. Citizen involvement is what helped make Metro special and what accounted for the agency's success.

I had the privilege of being Metro's last executive director. While my tenure had its share of challenges and heartache, it is an honor to have served. In spite of the many distractions the consolidation with King County brought, we remained focused on our mission. I am proud of the outstanding people of the Metro organization. They always conducted themselves professionally, with character and grace.

Countless people contributed to the Metro story and to our success. I thank the many volunteers who worked with us over the years to make our accomplishments possible. I thank our elected and appointed officials who guided the agency and made the tough decisions. I thank all the citizens who cared enough about their community to get involved in water quality and public transportation issues. I thank the many businesses and other organizations that worked with us on cooperative ventures. I thank the legislators, both at the state and federal level, who supported our programs, projects and services.

And finally, I thank each and every employee who gave their energy, creativity and talent to always deliver "better than promised."

Known as the father of Metro and a fierce advocate of community causes, James R. Ellis served as Metro's legal counsel from 1958 to 1979. 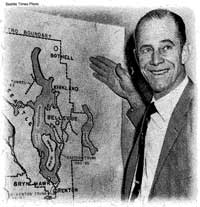 Citizens, dignitaries, and Metro employees gather to celebrate the dedication of the West Point Treatment Plant on July 20, 1966.

Hard copies of this document are available to check out at the King County Department of Natural Resources and Parks Research Center and the City of Seattle Public Library  .