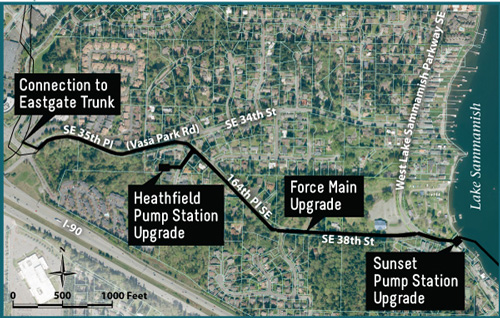 Contact Caryn Sengupta, community services lead at:
caryn.sengupta
@kingcounty.gov
206-296-7800 Project Hotline: please leave a message and we will return your call on the next business day.
Feedback form

What is the Sunset and Heathfield Pump Stations and Force Main Upgrade project?

The Sunset and Heathfield Pump Stations and related sewer pipes send sewage from Sammamish, Issaquah, and Bellevue to be treated at King County’s treatment plant in Renton. This project will upgrade both pump stations and the connected force main pipe. The project will also upgrade an underground sewer connection called the Eastgate Trunk, near I-90.

Why is the project necessary?

The pump stations and connected force main pipe have served the area for 50 years. They need to be upgraded to keep up with the growing population. This project will ensure King County can provide continued, reliable sewer service to the area for years to come.

What does the project include?

Four new pumps, new electrical and controls systems, new standby generators, and new heating and air conditioning systems will be installed at each pump station. There are two force main pipes that connect the pump stations to King County’s larger wastewater system. One of the existing pipes is 12 inches in diameter and the other is 24 inches in diameter. The existing 12-inch diameter pipe was replaced with a new 24-inch diameter pipe. Read our December 2016 newsletter for more information on the final design.

What is the current project schedule?

King County completed project design in late 2016. Construction began in 2017 and is expected to continue into 2021. The schedule and duration for construction activities is tentative and is subject to change as work progresses. We will continue to provide email notices and door fliers with updates on timing of specific construction activities. If you would like to join our email list, please visit the public involvement page.

What will pump station construction involve?

Most of the construction at the two pump stations will occur inside. Improvements outside of the buildings includes new landscaping and installation of a larger generator. You can expect to see crew members, trucks, and equipment at each pump station during construction.

What did the new force main pipe construction involve?

What are the differences between each construction method?

Open cut is a method of installing underground pipes that requires digging an uncovered trench. Once crews have finished digging the trench, they lay pipe into the open trench and restore all disturbed areas.

HDD is a construction method typically used to install pipelines under busy roadways and environmentally sensitive areas (such as wetlands and streams). The contractor uses a machine on the surface to drill an underground pathway for the new pipe, and then pulls the pipe through the new path.

There are three main steps in the HDD process:

What are typical work hours?

Typical working hours are 7 a.m. to 7 p.m. Monday-Friday. Some work activities may require the contractor to work outside of these times. If this occurs, the contractor will work with the City of Bellevue prior to starting work and residents will be notified by King County through fliers and/or email updates.

Will roads be closed during construction?

There will be temporary road and lane closures. Please refer to project home page for the latest closure information.

King County will work with the construction contractor to keep access to driveways and homes open as much as possible. There may be times that vehicle access will be limited during working hours. Affected residents will be notified prior to any driveway impacts.

Will there be noise?

Noise associated with construction activities should be expected, though the contractor is required to stay within the City of Bellevue Noise Ordinance requirements. King County will plan to monitor noise throughout construction.

Will the noise from the pump stations increase?

Noise is expected to remain at current levels when generators are not in operation. The upgrades include new generators that may result in higher noise levels during severe storm events; however, noise is expected to continue to comply with the City of Bellevue Noise Ordinance requirements.

Where will construction equipment be staged?

Construction equipment will be staged in the following locations:

Some school bus stops will need to be relocated during construction.

Will my utilities be affected/relocated?

Some utilities, such as gas and electricity, may be impacted. You will receive notice from your provider about any outages/impacts.

Will parking be impacted?

Some on street parking will be unavailable during construction. The contractor will place no parking signs near the work area when necessary, at least 48 hours in advance.

Will there be impacts to Vasa Park?

The construction contractor is required to maintain access to Vasa Park at all times. King County is working closely with Vasa Park throughout construction to minimize impacts to the park.

How will the project team address impacts to the environment?

The project team will continue to collect and review information on animals, plants, creeks, and wetlands in the area during construction. King County will work with the community, City of Bellevue, and appropriate government agencies to make sure all environmental restoration activities meet legal requirements. Low-impact construction methods will be used where the new force main pipe crosses Vasa Creek. Trees and other plants may need to be removed during construction. The County will re-plant new trees and plants in their place at the end of the project.

How can I stay informed during construction?

King County will provide advance notice and updates of construction activities via:

You can also leave a message on our construction hotline at 206-296-7800 and we will return your call on the next business day.

What did the project team consider during design?

Reliability, efficiency, lifecycle cost, permitting, operations and maintenance needs, environmental impacts, community input, and sustainability are some of the factors the project team considered throughout design of the pump station and force main upgrades.

What feedback has the community shared?

More than 250 neighbors and community members were surveyed so the project team could learn about the community’s interests and concerns. Based on their answers, King County knows neighbors want to maintain the look and feel of the project area and reduce traffic impacts during construction.

King County also hosted an open house in March 2014 inviting members of the public to share their preferences on fencing, landscaping, and lighting at the Sunset Pump Station. Their input is reflected in the final selection of fencing and lighting, shared at an open house in January 2017. To learn more about community input throughout design, please visit the public involvement page.

Will artwork be added?

No permanent artwork installations are planned at either pump station.

Will the project be educational?

The County is happy to set up a site tour for classes that want to learn about their sewer service. Contact Caryn Sengupta at caryn.sengupta@kingcounty.gov or 206-477-2514 for more information.

How will the pump stations be certified sustainable?

King County works to build and operate facilities that benefit the local community, environment, and economy on all our projects. The good news is King County can now earn a certificate for these efforts, called Envision.

The Envision program provides a framework to help measure how well an organization incorporates sustainability (environment, equity, and economy) on infrastructure projects and industrial facilities. This is similar to the Leadership in Energy and Environmental Design (LEED) program, which certifies occupied commercial and residential buildings. 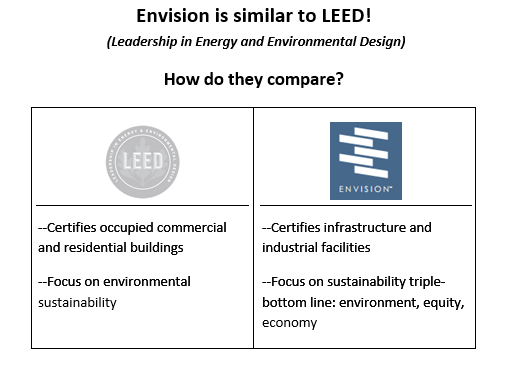