King County is responsible for regular maintenance of the roadside rain gardens year round. You can expect to see crews onsite at least monthly performing regular maintenance. Expect more frequent visits before and after large storms, and during the summer growing season. 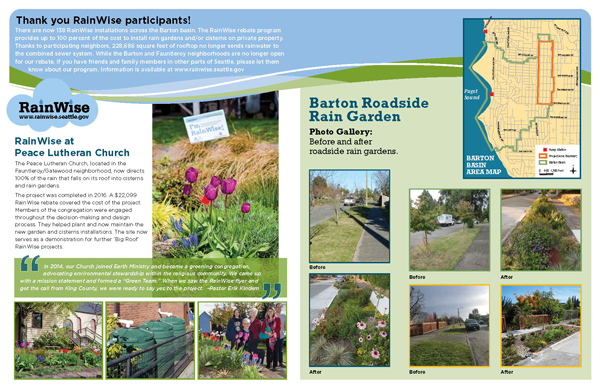 King County constructed 91 roadside rain gardens, a type of green stormwater infrastructure, on 15 blocks in the Sunrise Heights and Westwood neighborhoods in West Seattle. Located in the planter strip between the curb and sidewalk, these roadside rain gardens divert stormwater runoff away from the combined sewer system. When it rains, stormwater filters through the rain garden soil to a drain pipe, which takes the water to a deep well for slow infiltration underground. Keeping stormwater out of the sewer system will reduce CSOs of raw sewage and untreated stormwater into Puget Sound near the recently upgraded Barton pump station and Fauntleroy ferry dock. 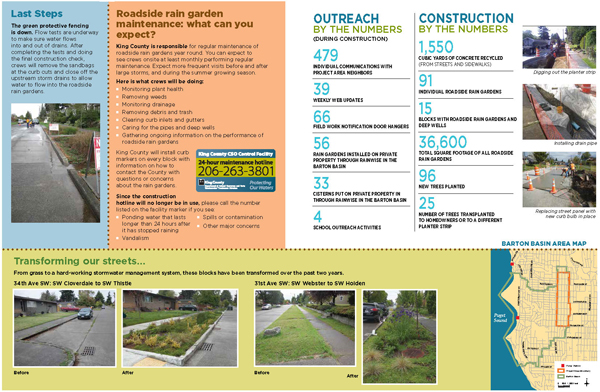 King County has installed curb markers on every block with information on how to contact the County with questions or concerns about the rain gardens. Please call 206-263-3801 if you see: 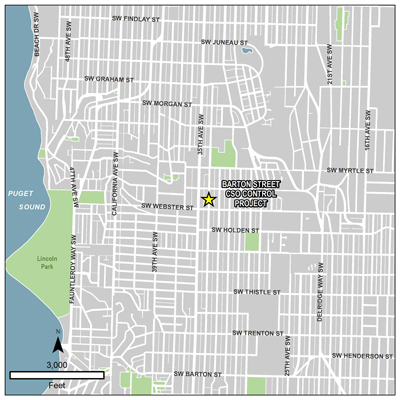 If you see a piece of trash, pick it up. Thank you for your ongoing care of the roadside rain gardens in your neighborhood. You are doing your part to protect the health of Puget Sound!

Find out if a CSO is occurring in Barton

King County maintains a real-time notification page so people can see whether CSO discharges are occurring.

King County has developed proposals to control combined sewer overflows (CSOs) at two locations in West Seattle—the Barton and Murray CSO basins. One project is the construction of a new 1.0-million-gallon storage tank on the east side of Beach Drive SW near Lowman Beach Park to control CSOs in the Murray CSO basin. The other is the installation of rain gardens in the right-of-way along 32 to 64 half-blocks in the Sunrise Heights and Westwood neighborhoods east of 35th Avenue SW to control overflows in the Barton CSO basin.

The Barton and Murray Combined Sewer Overflow Control Facilities Plan describes the reasons for these projects, the processes used to develop and evaluate alternatives, and the selection of proposed alternatives to advance for further environmental review. These projects are necessary to control CSOs in compliance with RCW 90.48.480 and WAC 173-245-020 (22).

This plan is submitted in compliance with the first of three compliance schedule dates noted in Section S18 of the West Point Treatment Plant National Pollutant Discharge Elimination System Permit (refer to page 53 of permit).

This project was initiated to address the following:

Links to other green stormwater infrastructure (GSI) projects and resources locally, regionally and around the country.