In 2005, King County staff began seeking ways to prepare our communities to adapt to the future world predicted by climate change scientists , a world of warmer temperatures and less predictable weather patterns.

A two-pronged strategy is underway at WTD:

1. Reduce and mitigate greenhouse gas pollution—address the cause of the problem so we don't make its effects worse.

To reduce and mitigate greenhouse gas pollution, we are working to lessen our dependence on fossil fuel for powering our plants and facilities. We are the largest electricity user of all King County government, as we treat the wastewater of over 1.5 million people all day, every day. A robust energy program has resulted in several projects that convert our digester gas to energy. We scrub the digester gas from the treatment process and use it in several ways; for energy on-site, sell it to Puget Sound Energy, or for cogeneration of power. (Cogeneration is when you do more than one thing with the energy, in our case we use it to power large pumps and recycle the heat generated from the pumps.) We have identified a series of energy conservation efforts and are systematically implementing them. We're also working on a division-wide energy plan to further identify opportunities in this area.

Biosolids, the nutrient-rich organic product of the solids digestion process, are being used as a soil amendment to fertilize fields of canola which is being used to produce biofuels. It also is used to fertilize forest plantations as well as wheat, grapes, orchards, and numerous other crops. Soil and plant uptake of carbon are proven solutions for sequestering carbon.

Carbon sequestration is the storage of carbon dioxide*  (usually captured from the atmosphere) through biological, chemical, or physical processes, for the mitigation of global warming .* This has been proposed as a way to mitigate * (take actions to reduce) the accumulation of greenhouse gases * in the atmosphere released by the burning of fossil fuels .*

2. Implement preparations and adaptations to the predicted changes.

At WTD, we are making a number of preparations and adaptations as climate change is expected to affect our business in several ways. Climate change can lead to extreme winter rainfall and a shift in timing of spring snowmelt which would increase the risk of flooding and higher flows that could challenge the capacity of our treatment plants and conveyance infrastructure. We are committed to:

Climate change is predicted to result in longer and warmer irrigation seasons and increase the risk of drought. Implementing water conservation projects on our own facilities and water conservation education offers immediate and long-term benefits. Reclaimed water is a possible water resource for non-drinking water uses. We have an operating reclaimed water program near South Treatment Plant and have invested in a reclaimed water distribution system for the Brightwater Treatment Plant. Reclaimed water is an excellent source of water for irrigation, industrial processes, groundwater recharge, and stream augmentation.

Visit Software Help if you have trouble viewing or downloading documents. 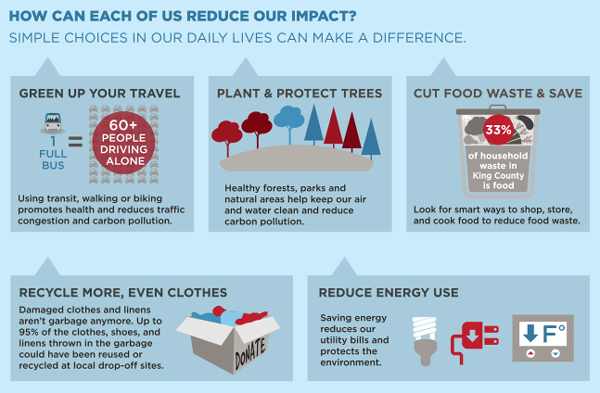 Doing our part to fight climate change as a Utility of the Future, October 5, 2017

Tips for conserving and protecting our water resources and sewer systems