Deliver a safe, reliable, and seamless network of transportation options to get people and goods where they need to go, when they need to get there.

Metro has emerged as a regional and national leader in modeling new ways to deliver mobility to the public and was named the best large transit system in North America by the American Public Transportation Association in 2018.

Demand for transit is at an all-time high, but the Puget Sound region is growing faster than anywhere in the United States. Recent studies project 30% more people by 2040

As we continue to grow, public transportation will play an increasingly important role in reducing congestion, protecting our environment, and getting more people where they need to go.

King County believes transit is good for our economy, our environment, and our people. We strive to deliver a safe, reliable, and seamless network of transportation options to get people and goods where they need to go, when they need to – safely, equitably and sustainably, as articulated by the King County Strategic Plan.

How much are we doing?

Metro’s ridership continues to increase throughout the county, while the Seattle area had the second highest total transit growth among all large U.S. metropolitan areas in 2017 and had the highest in 2016. Ridership has been steadily increasing and is linked to an increase in RapidRide. We’ve created a number different routes including RapidRide to increase the ability to move people where they need to go. We are expanding our RapidRide lines, which provide fast, reliable service every 5-7 minutes during the busiest morning and evening travel hours. Metro’s six current RapidRide lines provide about 67,000 rides every weekday, which is about 70% more than the bus routes that served the same areas before RapidRides launched. 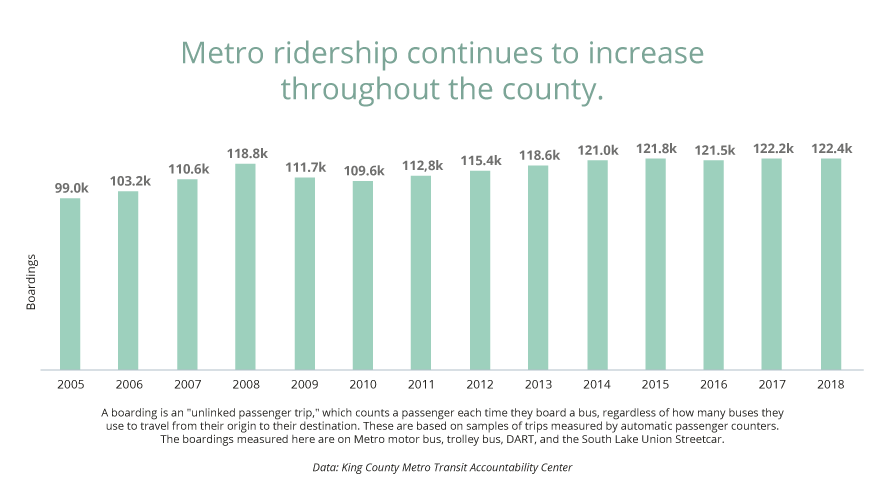 How well are we doing?

King County’s commitment to quality is manifested by its on-time performance. Currently, all transit services are on time 75% of the time. For RapidRide, 81% of rides are on time. And, 99.54% of overall trips are fully delivered for all Metro options with only 1.21% of trips detected as crowded, meaning the bus was too full to board or would skip a stop due to capacity.

Is anyone better off?

Because of the county's response to COVID-19, this data story will not be completed until the 2021 revisions.