Farmers, ranchers, and veterinarians, as well as slaughterhouse workers, meat inspectors, and laboratory personnel are at increased risk for brucellosis. In the United States, 100 to 200 brucellosis cases are reported each year. Most cases result from travel outside the United States and ingestion of unpasteurized milk products. Person-to-person transmission rarely has been documented. Because small amounts of aerosolized bacteria can cause disease, Brucella is considered a potential agent of bioterrorism. 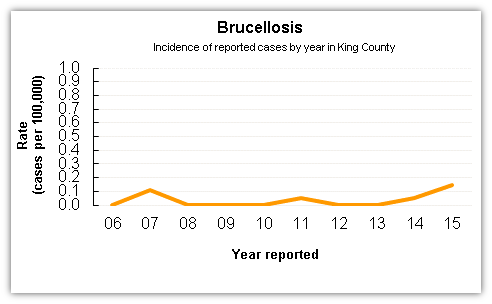 One confirmed and two probable brucellosis infections were reported in 2015, all in persons who likely acquired their infections while traveling internationally. Two of the cases required hospitalization. Because the infection can be acquired in the laboratory setting, nearly 40 clinical lab staff were monitored following exposure to one case's diagnostic specimen (a culture plate, that poses greater risk of transmission than antibody tests); no employees became infected.