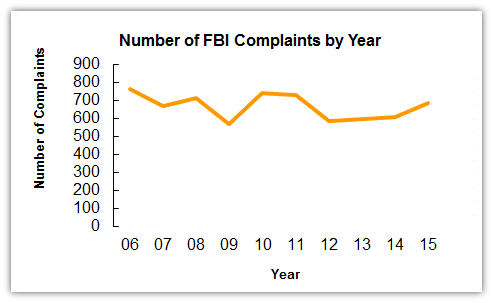 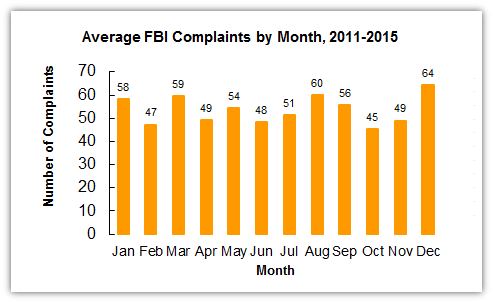 Public Health received 685 foodborne illness (FBI) complaints in 2015, compared to a five-year average of around 650 complaints annually. These are reports of possible foodborne illness associated with a vendor and reported by citizens, health care providers, and restaurants/food vendors. The reports are investigated to determine if they indicate a true foodborne illness and if action is needed to prevent further illnesses. Of the 685 FBI complaints, 123 (18%) resulted in an inspection of the food service establishment by Public Health's Environmental Health Division, and 57 (8% of total complaints) were categorized as probable or confirmed foodborne complaints, representing 18 outbreaks (sometimes multiple complaints are received for the same outbreak). To count as a probable foodborne complaint, there must either be evidence of unsafe food handling during an environmental health investigation or strong epidemiologic evidence of an outbreak linked to the food source. Confirmed complaints must meet the probable criteria and have laboratory confirmation of the suspected pathogen in the food or persons affected.

Twenty-two FBI investigations were initiated in response to laboratory-confirmed cases of Vibrio parahaemolyticus among diners who had consumed raw oysters from King County restaurants or grocery stores. During such investigations, Public Health staff retrieve information on the origin of the shellfish from the vendor, so that it may be traced back to the shellfish growing area. Shellfish growing areas can be placed under restrictions and monitoring for the duration of the high risk season for Vibrio (May-September), or any time they have been associated with an illness outbreak.

One investigation in 2015 linked four temporally clustered illness complaints for different King County vendors to a common oyster growing area. Specimens collected from ill persons and oysters sampled by Washington State Office of Shellfish and Water Protection from the implicated growing area both tested positive for norovirus, resulting in partial closure of a harvesting area. Although most shellfish-related illnesses occur during summer months when bacteria such as Vibrio parahaemolyticus proliferate in warmer waters, contamination by norovirus can occur at any time of year, as it is linked to human activity rather than to climatic factors.

Norovirus is the most common cause foodborne illness. Norovirus infection causes the sudden onset of diarrhea and vomiting (sometimes accompanied by muscle aches, chills, or fever) and typically resolves within 24 to 72 hours. Most cases of norovirus-related illness are not reported. Norovirus-like illness accounted for eight of the 17 confirmed and probable restaurant-associated outbreaks in 2015.

Four suspected cases of scombroid poisoning, an illness caused by ingestion of histamine in the meat of decomposing fish that resembles an allergic reaction, were reported. Symptoms begin within minutes of ingestion and include flushing, dizziness, headache, palpitations, and mouth numbness and tingling.

For more information on foodborne outbreaks caused by bacterial pathogens in King County in 2015, see: