Hepatitis E virus (HEV) causes an illness similar to hepatitis A virus (HAV) infection. The illness is acute and self-limited, without a chronic state. Symptoms include an abrupt onset of fever, malaise, nausea, vomiting, and abdominal pain. Jaundice follows within a few days. The spectrum of disease ranges from a mild illness lasting a few weeks to a severe illness lasting several months.

HEV is rare in the United States but is a common cause of viral hepatitis in developing countries. It is primarily acquired via the fecal-oral route, usually through contaminated drinking water. Outbreaks often occur after floods, monsoon rains, or other events that release raw sewage into the water supply. In the United States, most cases occur among travelers to areas where HEV is endemic. The illness is often more severe in pregnant women. The incubation period is 15 to 64 days. Secondary transmission in households through person-to-person transmission appears limited.

No vaccine or treatment is available for HEV. Treatment with immune globulin (IG) is not effective in preventing infection in potentially exposed persons. The best methods of prevention are to avoid potentially contaminated water and food and to use prevention measures recommended for hepatitis A and other enteric infections. 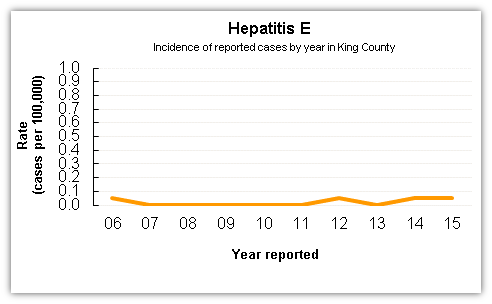 One case was reported in 2015 in a person whose entire exposure period was spent in India.

Each year in Washington state between zero and one cases of hepatitis E are reported each year.