Legionellosis (also known as "Legionnaires' disease") is a bacterial infection that was first identified after a 1976 outbreak in Philadelphia among attendees of the American Legion's annual convention. In the United States, an estimated 8,000 to 18,000 cases occur each year. Legionella are widespread in the environment, including in soil, natural bodies of water, water distribution systems in homes and buildings, and building cooling towers. Legionella can also grow in swimming pools, hot tubs and saunas, decorative fountains, and other man made water sources.

Disease occurs when the organism is inhaled in aerosolized water droplets, causing pneumonia. It has also been associated with inhalation of aerosols generated when using potting soil. Persons at increased risk for legionellosis include the elderly as well as those with underlying lung and heart disease, cancer, organ transplants, and other immune system disorders. Legionellosis outbreaks have occurred in hospitals and long-term care facilities, where residents are at higher risk because of advanced age and other chronic conditions. It is not spread person-to-person. 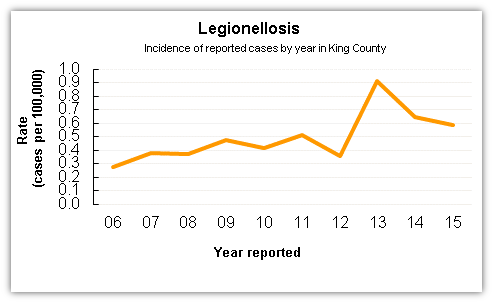 Most cases of legionellosis are sporadic (not associated with an outbreak), with no source identified.

Each year in Washington state between 15 and 45 cases of legionellosis are reported.