Malaria is a serious infection caused by a parasite of the genus Plasmodium, of which there are five species: malariae, vivax, ovale, falciparum, and knowlesi. The parasite is transmitted to humans in warmer climates through the bite of infected Anopheles mosquitoes. Symptoms of malaria include malaise, anorexia, chills, sweats, fever, and headache.

Untreated P. falciparum malaria has a high mortality rate. Hundreds of millions of people worldwide become ill from malaria each year. In the United States, almost all malaria is among international travelers; the last outbreak of locally acquired malaria occurred in Florida during 2003. Before going to an endemic country, international travelers should see a health care provider to discuss ways to prevent malaria. These include taking preventive medications and mosquito bite avoidance strategies such as repellents, protective clothing, and taking precautions at dusk and dawn when mosquitoes are most active. 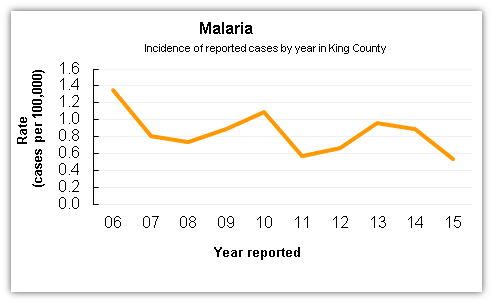 Twelve cases of malaria were reported in 2015, compared to a five-year average of 17 cases per year. Nine cases occurred among international travelers, and three were recent immigrants or refugees to the United States. Eleven cases were exposed in Africa, and one in Asia. Eight cases were caused by Plasmodium falciparum, three were P. vivax, and one could not be typed. Seven of the cases were hospitalized; none died.

Each year in Washington state between 20 and 40 malaria cases are reported.