Rubella (German measles) is a viral illness spread primarily by respiratory droplets (droplet spread) produced when an infected person coughs or sneezes. In children and adults, rubella causes a usually mild illness consisting of a rash accompanied by mild fever and swollen lymph nodes. When acquired by a mother early in pregnancy it can lead to premature delivery, congenital defects, and fetal death, depending on gestational age at time of infection. Congenital rubella syndrome (CRS) occurs in up to 85% of infants born to women who are infected with rubella during the first trimester. Vision and hearing impairment or loss are among the many potential manifestations of CRS.

Prior to widespread MMR (measles-mumps-rubella) vaccine use, an average of 162,000 cases and up to 50 deaths were reported annually in the United States. An average of five cases of CRS have been reported annually in the United States since 1980. Most reported post-natal rubella in the United States since the mid-1990s has occurred among Hispanic young adults who were born in Latin America and the Caribbean where rubella vaccine is not routinely used. Immunization is the best way to prevent rubella. Rubella vaccine is included in the MMR combination vaccine that provides protection against measles, mumps and rubella. 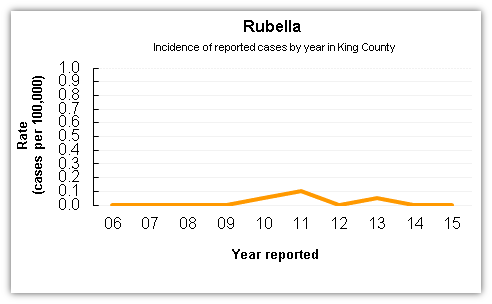 Each year in Washington state between five and 15 are cases reported.