E. coli are bacteria that normally live in the intestines of humans and animals. Many strains of E. coli bacteria exist, and most of them are harmless or beneficial to human health. However, strains that produce Shiga toxin (such as E. coli O157:H7) can cause serious illness in people.

Symptoms typically appear one to ten days after exposure (usually within 2–4 days) and include: diarrhea (which often becomes bloody) and stomach cramps, with mild or no fever. Up to 15% of cases can develop a kidney complication called hemolytic uremic syndrome (HUS); children under the age of five are particularly affected. Shiga toxin-producing E. coli (STEC) infections are diagnosed by doing special tests on a stool sample from an ill person.

Infection with STEC can occur through consumption of: undercooked ground beef and other beef products; unpasteurized milk, cheese, and juice; contaminated raw fruits, vegetables, and herbs; water contaminated with animal feces, or by direct contact with farm animals or their environment. Ready-to-eat foods can also be contaminated with STEC through contact with raw beef or raw beef juices in the kitchen. Large multi-state outbreaks involving commercially distributed food products including beef, produce, and cheese have occurred in recent years.

Person-to-person transmission of E. coli can occur through the fecal-oral route, including transmission within households, child day-care centers, and long-term care facilities. Transmission is facilitated by inadequate hand washing after a bowel movement and contamination of objects in the environment. 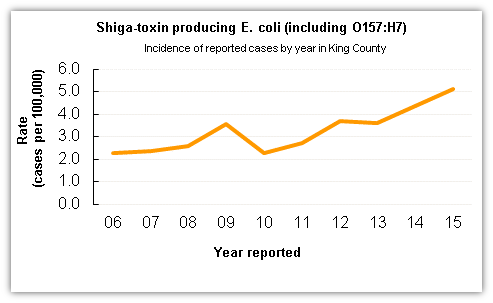 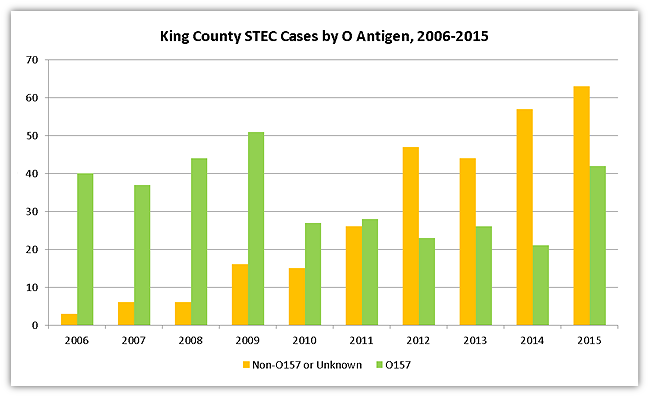 Twenty-seven of the patients (24%) reported in 2015 were hospitalized, five of whom were children under age 13. There were five cases of hemolytic uremic syndrome (HUS) resulting from STEC infection reported in 2015. On average, King County receives 0–4 reports of HUS per year.

Two separate outbreaks of STEC were linked to eating at Chipotle Mexican Grill during 2015. The first outbreak, affecting only King County residents, included five persons infected with E. coli O157:H7. Three of the cases were hospitalized. All cases had consumed food from the same Chipotle location over the course of one week. No single food item could be found to account for the illnesses. The second outbreak tied to Chipotle affected at least 55 people from 11 states, including four persons from King County (two of whom had to be hospitalized for their infection). The second outbreak was caused by E. coli O26 and was unrelated to the first, smaller outbreak. Despite extensive food traceback and testing, no ingredient was implicated as the cause of the outbreak.

Thirteen cases of E. coli O157:H7 were tied to eating food from a King County taco vendor who frequented several farmers’ market locations in King and Snohomish counties. Ten cases were among King County residents, two of whom developed HUS as a result of their illness. After observing deficiencies in the central commissary used by the taco vendor, Environmental Health closed the facility to all operations for two weeks so that corrections could be made. No additional cases were reported once the vendor resumed operation.

Each year in Washington state 141 to 330 cases are reported, with most cases occurring in the fall and summer.