Rabies is a preventable viral infection of humans and other mammals that is most often transmitted through the bite of a rabid animal. The rabies virus infects the central nervous system (the brain and the spinal cord). Proper treatment obtained promptly after exposure to a rabid animal can prevent rabies in humans, but once symptoms begin, rabies is almost always fatal. Approximately one to three humans die from rabies annually in the United States. In Washington State, bats are the only known natural animal reservoir for the rabies virus; bats can be infected with the virus and don’t always appear sick or die, which allows the rabies virus to persist in the Washington State bat population.

The Washington State Public Health Laboratory (WSPHL) performs rabies testing on all animals that have potentially exposed people to rabies. Animals that have potentially exposed only pets to rabies can be tested at the Oregon State University Veterinary Diagnostic Laboratory at the pet owner's expense. For more information, please see testing bats for rabies in King County (click on accordion menu item #5).

In 2018, a total of 121 animals from King County were tested for rabies, including 106 (88%) bats, nine (7%) cats, and three (2%) dogs (Table 1). More animals were tested for rabies in 2018 than previous years. Ten of 106 (9%) bats tested positive for rabies; all other animals tested negative for rabies. Seven rabies-positive bats were tested at WSPHL and three at OSU. Eleven percent of the 63 bats tested at WSPHL were positive for rabies, and 7% of the 43 bats tested at OSU were positive. Six of the ten rabies-positive bats were Big brown bats (Table 2). Testing of animals was highest in August; 71% of all tests were conducted from June to September (Figure 1). 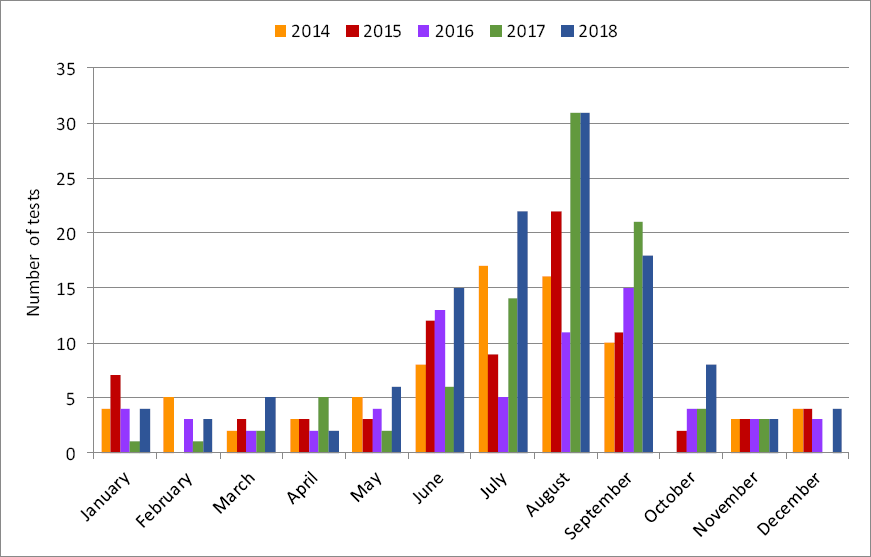 The Washington State Department of Health’s document Washington State Animals Tested for Rabies lists the results of animal rabies testing statewide since 1988. Over the past ten years, 63% of all animals tested annually were bats; followed by cats (20%) and dogs (12%). In 2018, 531 bats were tested, with 40 (7.5%) positive for rabies. Almost 150 other animals were also tested in 2018, and all were negative for rabies virus. In 2015, one privately owned, unvaccinated cat tested positive for rabies. Several people underwent rabies post-exposure prophylaxis after a bite or other potential rabies virus exposure to this rabid cat.

Potential human exposures to rabies that should be evaluated by Public Health include:

Animal bites to people in foreign countries where rabies may be endemic, especially bites from bats, primates, dogs, cats, or wild carnivores, should also be reported to Public Health at 206-296-4774. Rabies PEP is administered to persons who have been exposed to a rabies-infected animal or a potentially rabies infected animal when 1) the animal is not available for rabies testing OR 2) a dog, cat or ferret that bites a person and is suspected of having rabies cannot be confined and observed for signs of rabies for ten days.

In recent years, about three-quarters of rabies PEP given in Washington Statehas been a result of bat exposures, 10% from dog exposures, and the remaining 15% from other animal exposures (e.g. cat, raccoon, monkey).

In 2018, rabies PEP was recommended to 158 King County residents reported to Public Health with animal exposures. Of 156 people with available information, 88 (56%) were exposed in King County, 12 (8%) in other areas of the United States and 56 (36%) abroad. Most (84/88, 95%) of the suspected King County rabies exposures resulted from bat exposures.

Information about bats and rabies, including safely catching a bat, rabies testing, and wildlife control services that can assist with removal of bats from residences is available at www.kingcounty.gov/bats