Three most common parts of a septic system

A septic system consists of two main parts: a septic tank and a drainfield. Some systems also have a pump tank. 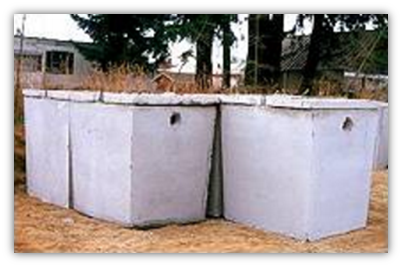 In the septic tank, bacteria that live without oxygen break down a lot of the organic matter. Sewage from all plumbing fixtures drains into the septic tank, where heavy solids settle to the bottom, where bacterial action produces digested sludge and gases. The lighter solids, such as grease, oils and fats, rise to the top to form a scum layer.

Solids that are not decomposed remain in the septic tank. It is important to remove solids from the tanks periodically by pumping them out. If they are not removed, they will continue to accumulate until they overflow into the drainfield. This eventually leads to drainfield plugging and drainfield failure. The first signs of failure may be slow-draining fixtures. However, the system may fail by discharging sewage to the ground or back-up into the house. Tanks should generally be pumped every 3-5 years.

Sewage leaving the septic tank is called "effluent." While it has received some treatment in the septic tank, it still has an unpleasant smell and contains disease-causing organisms, organic wastes, and other pollutants. This effluent needs to go through the next stage of treatment (the drainfield) or it can lead to significant environmental and public health problems. 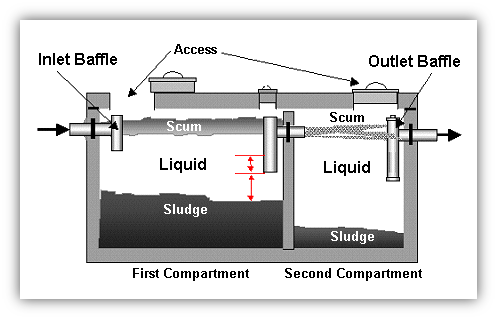 In the drainfield, sewage from the septic tank flows through pipes in the yard for final treatment by organisms in the soil.

The sewage trickles through soil for 2 or 3 feet, where aerobic bacteria and minerals in the soil break down the remaining organic material and kill most of the remaining germs. The soil also locks up chemicals such as phosphates. Your yard should also have a "reserve area" where your replacement drainfield will be located if the drainfield fails.

Because the bacteria that break down the sewage need oxygen to survive, it is important that you do not build patios over the drainfield or drive over it and compact the soil. For landscaping and maintenance tips, please see Landscaping your drainfield.

Current regulations prevent building drainfields where soils might become saturated (filled with natural groundwater). Therefore, your drainfield should work well year-round, even during the rainy season, unless:

If the drainfield is saturated or sewage doesn't have 2 to 3 feet to trickle down through, treatment cannot be completed. This can lead to contamination of groundwater and fresh water sources.

Some systems have a pump tank in addition to a septic tank. This pump tank contains an effluent pump, control floats, and a high-water alarm. The control floats are set so that a specific volume of sewage is sent to the drainfield. This specific amount is referred to as a “dose.” When sewage in the pump tank reaches the "on" float, the pump is activated and pumps sewage out until it reaches the "off" float (See diagram below.)

If the "on" float or pump fail to work, an alarm will activate once sewage reaches the alarm float. Once this alarm is activated, there is some emergency storage space available in the pump tank before the system overflows or backs up into the house. The alarm device is commonly located under the kitchen sink, in the garage, or on the side of your house. It can be silenced, but this will not resolve the problem. In such an event, homeowners should immediately begin emergency water conservation measures and call an On-site System Maintainer or contact Public Health at 206-477-8050. 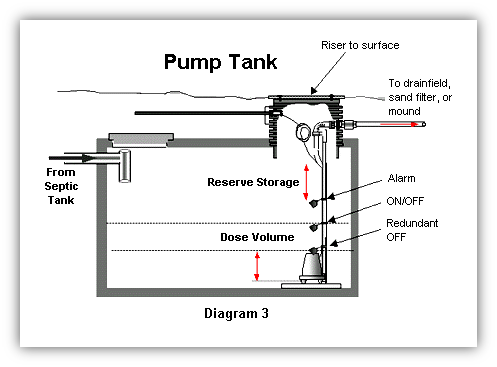