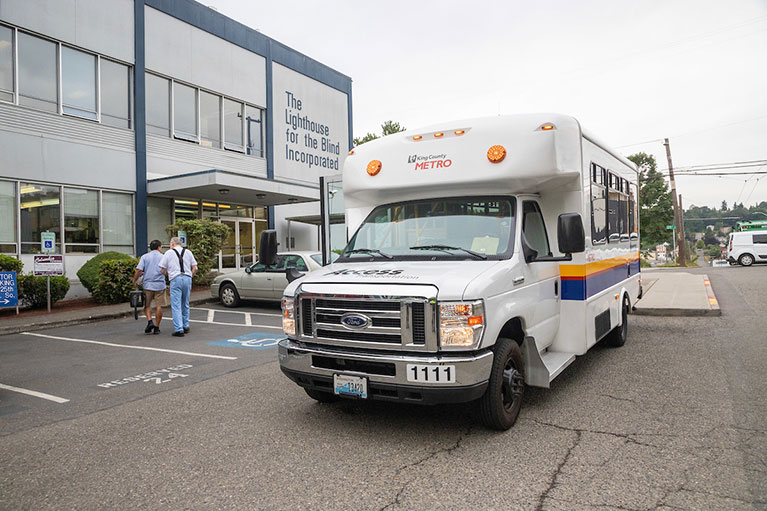 The Access Paratransit Advisory Committee (APAC) enhances Metro’s Access paratransit program by advising the agency on priorities and areas of mutual concern while developing a vision for ongoing improvements.

The Access Paratransit Advisory Committee (APAC) will advise Metro, the King County Executive and King County Council on transit issues and policy related to matters of equal access to public transportation for persons with disabilities. Metro’s Access Paratransit program serves people with disabilities who are unable to use fixed-route buses, helping them lead more independent lives. This committee was established by King County Ordinance #18838 in November of 2018.

APAC meetings are open to the public, but please note that the committee is not a decision-making body, so it does not accept public comment. If you wish to express your views on transit, including Access, to decision makers, the King County Council's Regional Transit Committee and the Mobility Committee meet regularly and offer time on their agendas for public comment.

Additional reasonable accommodations and/or written material available in alternate formats are available upon request at least 10 days before the meeting, if less than 10 days we may not be able to fulfill your request.

To request an accommodation, you can:

The APAC is specifically charged with:

Prior to APAC, King County Metro convened the Access Task force in April 2018 to support Access riders, their caregivers, and other community stakeholders with an opportunity to advise Metro on its paratransit program. The Access Task Force members provided guidance and advised Metro on responding to the 2017 King County Auditors’ report, advised on a new proposal for a provider, and the implementation of the new provider contract in 2019.

The Access Task Force (2018-2019) was also built upon the important community work from the past several years. In 2016, Metro secured a grant to support inclusive planning. A Community Advisory Group was formed in 2016-2017 to represent the interests of Metro Access riders as County staff prepared a request for proposals from paratransit service providers. After the County released this request for proposal, Metro then put the procurement process on hold to ensure that the future contract would reflect community recommendations. In the Fall of 2017, Metro convened an RFP workgroup that was specifically tasked with advising Metro on how to improve its request for proposal for a new contract.

Following the discerning input provided by the Access Task Force during the procurement process, King County Council commissioned Metro to form APAC to continue to promote responsiveness and accountability to the community as its new contractor began operations.

Download files include agendas, minutes, and supporting documents for each meeting date listed below:

View schedules and track your trip

Check out online timetables or canceled trips, and access real-time departure information with Text for Departures or Trip Planner.