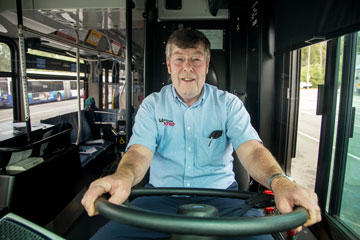 Metro officials praised Boone during a surprise ceremony in Bellevue, echoing commendations received from customers over the years. Boone has been driving buses since before Metro Transit formed in 1973.

“John’s enthusiasm makes him a favorite at the bus base and at every stop on his route,” said King County Executive Dow Constantine. “If you want to know which bus John is driving, just listen for the ‘Go Hawks’ chants each fall.”

Boone pilots the Eastside’s Route 246 on weekdays, carrying customers between Clyde Hill, downtown Bellevue, Somerset and Eastgate with an enthusiasm that brightens the day for riders. His zeal grows even more during football season: as a devoted Seahawks fan and original season ticket holder, he can be heard leading “Go Hawks” chants and raising spirits with his coworkers.

“John is in an elite group of our best operators who are driven to provide the best customer service we can offer and we’re proud to have him on our team every day,” said Metro Transit General Manager Kevin Desmond.

Boone was born and raised in Seattle, graduated from Ballard High School and now lives in Bellevue. He grew up loving buses, loves transportation and found a perfect fit with a career behind the wheel helping his customers get where they need to go.

He has earned his 34-year safe-driving award. His advice for fellow drivers is to “be careful. Double check and triple check, and don’t let your head or your eyes stop moving.”

When not driving for Metro, Boone is actively involved in a variety of Seafair events, volunteering at the hydroplane races, working as an active volunteer of the Unlimited Hydroplane & Race Boat Museum, and serving previously on the board of the Seafair Boat Club.

Praise for John Boone from riders

Since 1979, the drivers themselves have selected the best of their peers to hold the title of Metro Transit’s Operator of the Year. They are rated on excellence in safety, customer service, and service to their fellow operators. In order to receive the award, a driver must first be chosen Operator of the Month from one of the seven transit bases. At the end of the year, the Operator of the Year is selected by a vote of all fellow Operators of the Month. The annual ceremony is usually held the following summer.