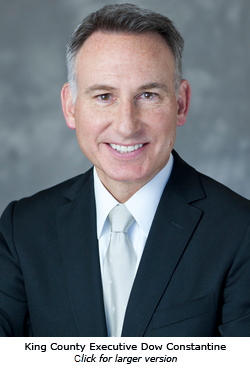 Serving his fourth-term as King County Executive, Dow Constantine leads one of the largest regional governments in the United States. His priority is that every person be able to thrive, be economically secure, and contribute to the life of our community.

He is focused on meeting two of the greatest generational challenges of our time: building equity and opportunity, and confronting climate change. Guiding every initiative is the goal of becoming the most forward looking, best run government in the nation.

Dow led the County's successful effort to enroll nearly 200,000 residents in affordable healthcare. He created partnerships to rebuild the South Park Bridge, preserve the longest remaining natural shoreline in Puget Sound on Maury Island, and protect South King County communities from the threat of catastrophic flooding. He united local cities to aggressively reduce climate pollution, and worked with Public Health and Planned Parenthood to cut the teen birth rate by more than half.

For his work improving efficiency and accountability, Governing Magazine named Dow a nationwide Public Official of the Year in 2016. In recognition of the county’s success in teaming with employees to save tens of millions of dollars in healthcare costs, Dow received the prestigious Innovations in American Government award from Harvard's Kennedy School of Government, along with the Leaders in Healthcare recognition from Seattle Business Magazine.

Since he was elected Executive in 2009, defeating current state Republican Party Chair Susan Hutchison by nearly 20 percent of the vote, Dow has worked to instill a culture of performance, engaging and empowering employees to continuously improve how King County does business. His reform agenda put King County on sound financial footing, his biennial budgets have consistently maintained costs below the rate of inflation and population. Since 2009, King County has taken advantage of its strong bond ratings to strategically re-finance 14 times for total debt service savings of more than $500 million.

A Seattle native and fourth-generation Washingtonian, Dow graduated from West Seattle High School and the University of Washington (1985), where he also earned post-graduate degrees in law (1989) and urban planning (1992).

Dow became interested in politics at an early age, and in college served as a legislative intern to 34th District State Sen. Phil Talmadge. While helping organize a community effort to preserve open space, he first teamed with County Council member Greg Nickels, with whom he later worked as a legislative aide. After graduation, Dow practiced law and worked on a number of community projects in parks and open space, the arts, human services and housing.

Elected to the Washington State House of Representatives from the 34th District in 1996 and again in 1998, Dow was then elected to the State Senate in 2000. He served as co-chair of the House Judiciary Committee and vice-chair of the Senate Ways & Means Committee.

Upon Greg Nickels’ inauguration as Seattle mayor in 2002, Dow was appointed to the King County Council, and won election to the office four times—in November of 2002, 2003, 2005, and 2007. Dow chaired the committees on government operations, growth management, regional transit and the county budget, and served as County Council Chair in 2009. As a member of the Council's budget leadership team, he worked to slow the growth of King County's jail expenditures through such innovations as drug court, mental health court, and driver re-licensing programs.

Dow has been a consistent supporter of transportation alternatives and, as Sound Transit Board Chair, led the three-county agency in creating the regional light rail expansion plan strongly endorsed by voters in 2016.

In addition to Sound Transit, Dow serves on the boards of the Puget Sound Regional Council and Mountains to Sound Greenway. Prior to becoming Executive he was a longtime volunteer for his high school, and previously served on numerous volunteer boards including the West Seattle HelpLine, Allied Arts of Seattle, the Delridge Neighborhoods Development Association, and the Washington Trust for Historic Preservation.

Dow is an avid skier and music enthusiast, and can invariably be found on autumn Saturdays with his family at Husky Stadium, where his grandfather first took the field nearly a century ago.

Dow and Shirley are raising their young daughter in the same West Seattle neighborhood where he grew up.