King County will implement a reduced fare program for lower-income Metro bus riders by March 2015. Metro will be the second major transit system in the nation to offer this type of fare. 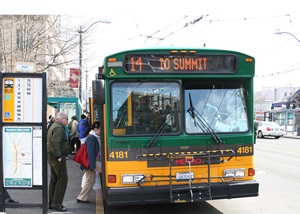 Acting upon new recommendations from an independent task force, King County Executive Dow Constantine announced how King County will implement a reduced fare program for lower-income bus riders by March 2015.
King County Metro will be the second major transit system in the nation to offer this type of fare.
"One of the ways we create opportunity is by helping people get to work, get to school, and get to the services they need to reach their full potential," said Executive Constantine. "This reduced fare program will ensure that those who have lesser means still have access to opportunity."
The reduced fare will be $1.50 for those who qualify. It takes effect on March 1, 2015, the same day that all regular Metro fares will increase by 25 cents. It is the fifth fare increase for Metro riders since 2008. In that time, off-peak fares will have increased by 100 percent.

The Low-Income Fare Implementation Task Force spent weeks examining Metro's proposed structure [PDF]for the new fare program. In their letter to the Executive and King County Council, Task Force members praised the County's emphasis on equity and social justice, and said the program "will make a major contribution to the County's effort to create a more equitable community where everyone can realize their potential."
> > Read the Task Force’s full report [PDF]
"I applaud the great work of the Task Force members, many of whom served on the Low-Income Fare Advisory Committee that recommended King County implement a low-income transit fare," said Councilmember Larry Gossett, who was the primary sponsor of the motion that created the original planning committee.
"It has taken us a little over two years of hard work by the Executive, the Council, human service agencies, and the members of both task forces to get us to this point. I look forward to working closely with the Executive and my colleagues on the Council to ensure a successful launch of the County's low-income transit fare by March 2015. I am proud that Martin Luther King Jr. County will be one of the first major transit agencies in the country to implement a low-income fare," Gossett said.
"The low-income fare speaks volumes about the values of our region, and its goals towards greater equity and access to public transit throughout King County," said Councilmember Dave Upthegrove, author of the amendment that created the Task Force.
"I am grateful and appreciative to the voices of our community on the Low-Income Fare Implementation Task Force for their hard work and commitment to help create a viable plan to implement the low-income fare in 2015. As one of very few transit agencies with a dedicated low-income fare in the nation, the Task Force tackled complex issues of outreach, determining eligibility, and strengthening community partnerships. The Task Force’s recommendations provide invaluable insight from King County's diverse communities," Upthegrove said.

How the reduced fare program works

The Task Force noted there will be significant challenges in verifying the incomes of people who apply for the reduced fares, and in establishing locations across the County's wide geographic area where people can apply for a reduced fare ORCA card.
Metro will partner with Public Health – Seattle & King County to administer the program. Public Health proved to be successful at engaging lower-income residents and partnering with local community groups when it helped enroll more than 165,000 King County residents for health insurance under the Affordable Care Act.
Public Health will also help Metro develop a countywide network of third-party human service agencies and community-based providers that can verify client eligibility, ensure program integrity, help with enrollment, and provide ongoing support.
To ensure that everyone who is eligible for a reduced fare is aware of the program—particularly people who are not proficient in English—the Task Force recommended a robust outreach effort.
An estimated 45,000 to 100,000 riders will be eligible for the reduced fare program. The Task Force recommended beginning verification of applications by at least February in anticipation of the program launch in March.
The Task Force also noted the need to ensure proper documentation without creating an undue burden for those who qualify: "Given that this is a groundbreaking program—very few large cities have one—the program will undoubtedly need refinements after it is launched to ensure that the right balance is achieved and maintained."

Task Force members offer their support for the program

"Rising housing costs are leading many families to locate in lower-cost locations that may be farther away from where they work," said Mike Heinisch, executive director of South King Council of Human Services. "Providing a low-income fare is one way we can help keep the region more affordable for working families and ensure equal access to economic opportunity."
"As a social service agency, we work with people who are in dire need of affordable public transportation to get to training classes, meet with case managers, find and get to jobs and health care appointments, as well as other important appointments," said Mahnaz Kourourian Eshetu, executive director of Refugee Women's Alliance. "The efforts of our County Executive and County staff to make the discounted transit fare widely available to people who need it the most is admirable and will have a positive effect on the County's economy while creating stronger communities. It was an honor to serve on this task force."
"King County is one of the first regions in the nation to put a low-income fare in place, helping to make sure that our bus service really is serving the whole community," said Alison Eisinger, director of Seattle-King County Coalition on Homelessness. "We can be very proud that we are putting our values into practice in this way, by taking a big step that will help advance greater equity and access to opportunity. Thousands of people, and our community as a whole, will benefit from this progressive policy."

Creation of a reduced fare was initially proposed by the Low-Income Fare Options Advisory Committee representing a broad cross-section of interests in mid-2013. The Committee focused on ensuring that even during Metro's current funding crisis, adults who earn lower incomes would have affordable transit options.
In February 2014, the King County Council adopted a $1.50 reduced fare to offset the economic effects of a 25-cent fare increase beginning in March 2015. The Council called for an implementation plan and a task force to review it. The Task Force met five times this summer to review and make recommendations.
The program will cost Metro an estimated $7 million to $9 million each year in reduced fares and administrative costs but will help offset the effects of five fare increases since 2008. The program supports Executive Constantine's commitment to building equity and social justice.