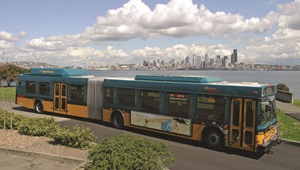 King County Executive Dow Constantine is taking action to ensure Metro remains one of the greenest major transit agencies in the nation, authorizing Metro to test a new generation of battery-powered, zero-emission buses.

"Ten years after King Country began replacing older buses with hybrid-electric models, we now have technology that holds the promise of an even cleaner and more energy-efficient fleet," said Executive Constantine.

Thanks to a $4.7 million grant from the Federal Transit Administration, Metro recently signed a deal with Proterra Inc. to replace two older buses with 40-foot heavy-duty battery electric buses. With two-thirds of its buses now all or partially powered by electricity, Metro plans to make its entire fleet even greener by 2018.

"This testing will allow us to understand where these electric buses can best be used and what their performance will be like within our real-world operating environment," said Metro General Manager Kevin Desmond. "These answers, combined with ongoing federal support and growing interest, will be key in moving this technology into the mainstream."

The zero-emission coaches will include fast-charge batteries and allow Metro to test performance and efficiency as part of its normal operations. The electric buses are designed to operate up to 23 miles between charges and get the equivalent of 15 miles per gallon more than a regular diesel coach.

The outcome of the testing will help determine whether battery electric bus technology represents a promising replacement option for Metro’s regular 40-foot diesel coaches. The demonstration will also determine how the technology compares with the performance of Metros’ hybrid fleet.

Metro expects to begin testing the battery-powered buses in June 2015.

In the meantime, Metro will continue to replace older buses with hybrid-electric models, including 35- and 40-foot buses that allow the engine to completely cut off when there is no need for power. The new feature will reduce fuel costs by an addition 5 to 10 percent each year.

By helping reduce the number of cars and trucks on streets – along with its energy-efficient fleet, LEED-certified facilities, and recycling efforts – Metro has reduced the amount of carbon dioxide it produces by 600,000 metric tons each year.

Metro has also saved about $4.8 million annually by using fuel-saving hybrid technology. Its electric trolleys save an additional $1 million due to higher energy efficiency and the lower cost of electricity relative to diesel fuel.

In addition to operating the largest articulated hybrid fleet in the United States, Metro has the second largest electric trolley system and the largest all-electric vanpool fleet in the nation. This commitment to environmental sustainability earned Metro gold-level recognition by the American Public Transportation Association in 2013 for actions taken to protect the environment.