Thanks in part to actions King County has taken in recent years to improve service and increase efficiency, Metro is expected to provide more than 120 million rides this year—the most in the transit agency’s 41-year history.

Metro Transit will close out 2014 with an all-time high in the number of bus trips taken in King County. In the days just before Christmas, Metro expects to break the annual record for most rides taken in its 41-year history.

Preliminary data show Metro’s annual ridership will be about 2 percent higher compared to 2013. That’s more than 120 million rides—
or an average of nearly 400,000 trips each weekday. Metro is the ninth-largest transit agency in the United States for ridership.

“Our work in recent years to increase efficiency and productivity is helping to move more people than ever before," said King County Executive Dow Constantine. "The transit measure approved by Seattle voters last month will help keep pace with increasing demand within the city, but sustainable, long-term funding is needed to satisfy the growing unmet need for reliable public transportation throughout our county and region.” 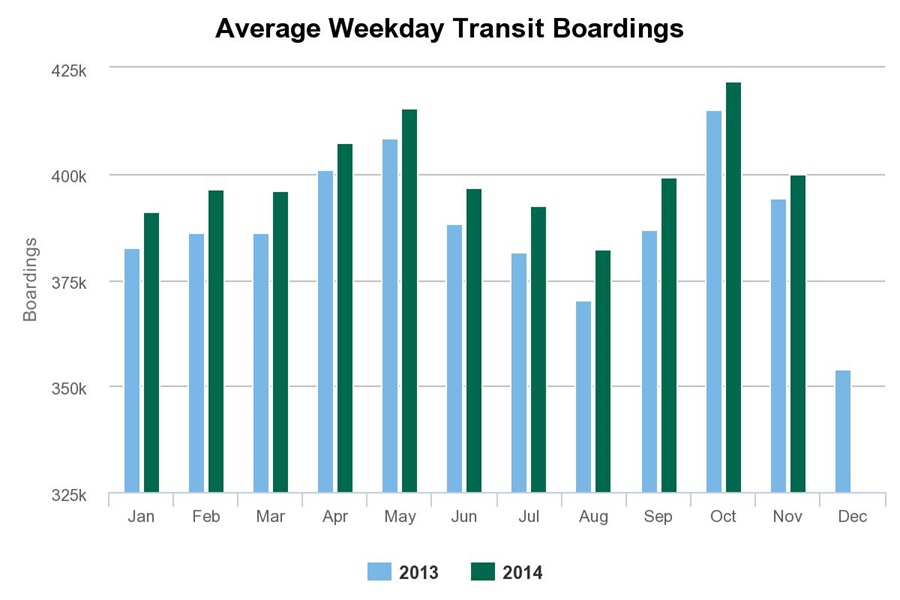 King County’s strengthening economy and the success of Metro’s six RapidRide routes contributed to the record-setting year. Metro’s effort in recent years to make its operations more efficient has also allowed it to deliver more service with existing resources. Metro is also seeing the benefit of increased service integration and joint planning with Sound Transit, which Executive Constantine—who is also Chair of Sound Transit’s Board of Directors—called for in June.

The A Line, operating along Pacific Highway South/International Boulevard, is once again leading the way with an 82 percent increase since being launched in 2010. Ridership on the C Line between West Seattle and downtown is up 75 percent.

“With the first RapidRide launch in 2010, we knew more frequent all-day service, new buses and improved stations would prove to be a winning combination,” said Metro General Manager Kevin Desmond. “Now our riders are reaping the full benefits of that investment as six of the county’s busiest transit corridors break ridership records with each passing month.

These ridership trends are reflected in a new quarterly report Metro is launching to keep the public up to date on how it is performing on a variety of fronts. These quarterly performance reports will help riders keep tabs on service trends and better track what Metro is doing to improve even more. You may sign up to receive notifications like this from Metro Transit via email or text message. 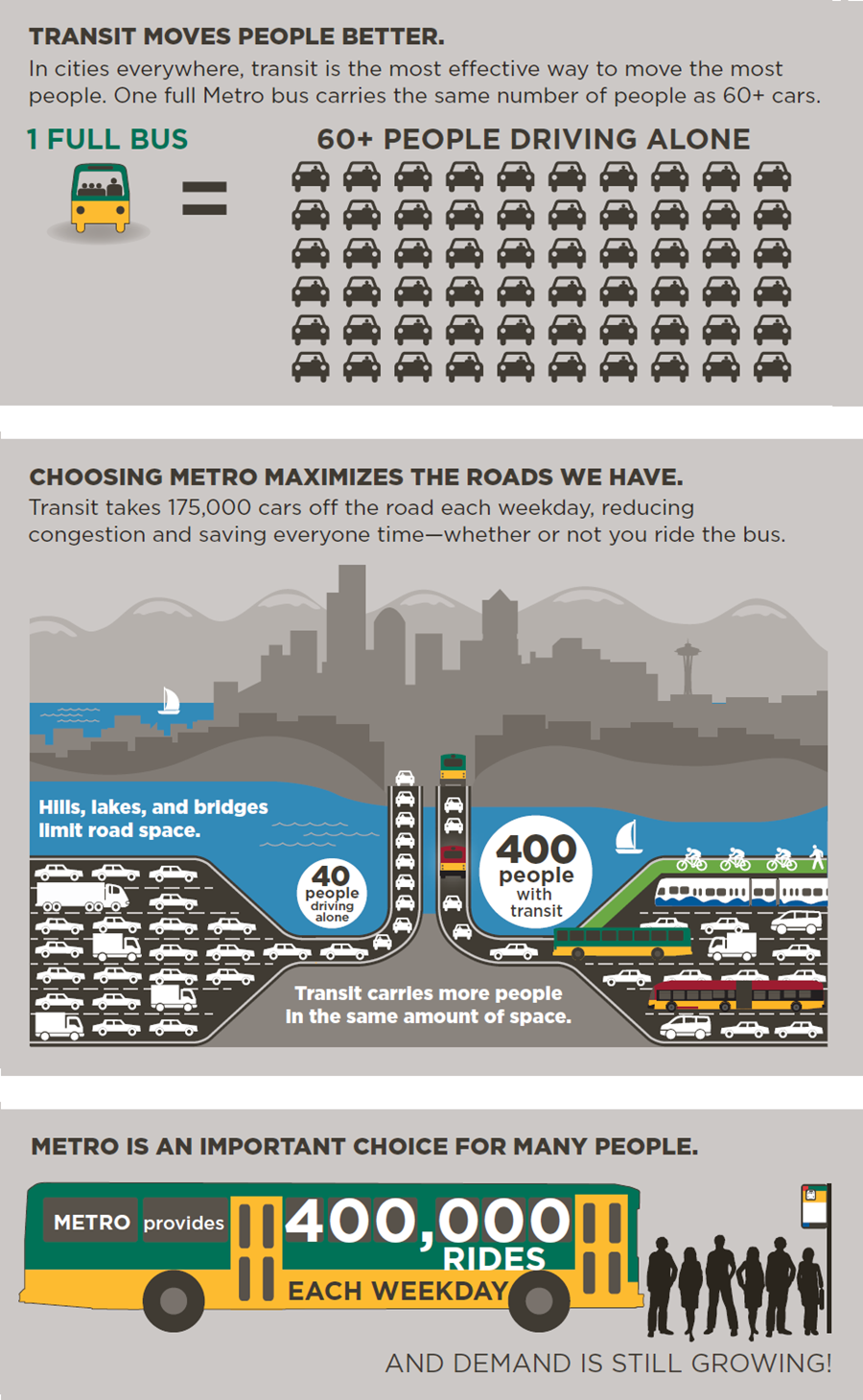 * View the full infographic on Why Metro Matters.

Use of park-and-rides also increased in 2014 and continues to show strong linkages between park-and-ride usage, transit ridership, and economic growth.

Park-and-ride use by both north and south county commuters is up 4 percent with eastside commuter usage up 3 percent compared to last year. Several lots continue to operate at or above capacity, including Aurora Village Transit Center, Kenmore, and Northgate Transit Center. East and south park-and-ride lots also continue to be popular, with Eastgate, Issaquah Highlands, Kingsgate, Redmond, South Bellevue, South Renton, and Tukwila also operating at 100 percent or more capacity.

Given the importance park-and-rides play in helping people use transit, Metro will continue to work with Sound Transit and other agencies to expand capacity where feasible and search for additional parking locations near existing overcrowded park-and-ride lots.

Metro’s commuter van program also remains popular. The program had more than 1,400 commuter groups participate this year—about 50 more than in 2013. Those vanpool/vanshare groups have taken more than 3.4 million trips, which is roughly the same number of rides that were delivered last year.

In 2015, Metro will work with the City of Seattle to deliver investments recently approved by city voters. Those investments will help ease overcrowding, improve schedule reliability, and add service to meet demand in key corridors.

Metro’s Strategic Plan [PDF] and service guidelines say transit service should be growing by an additional 15 percent—or about 550,000 annual hours—just to keep pace with current and projected demand. Looking ahead to 2015, Metro will continue to move forward with delivering innovative alternative services at a lower cost. And Executive Constantine will continue to push for statewide transportation financing solutions that will help Metro reduce overcrowding, improve service reliability, and meet target service levels in 58 corridors that serve places where many people live, work, or go for other activities around King County.