In the absence of action by the Legislature on a statewide transportation package with local funding authority, regional leaders today united in support of a specific ballot measure that would give King County voters a chance to save Metro bus service and address the backlog of road and street maintenance in the cities and County.

In the absence of action by the Legislature on a statewide transportation package with local funding authority, regional leaders today united in support of a specific ballot measure that would give King County voters a chance to save Metro bus service and address the backlog of road and street maintenance in the cities and County.

King County Executive Dow Constantine was joined today by four King County Councilmembers and others in proposing a local funding measure for the April ballot. The proposal also calls for adoption of a scheduled fare increase of 25 cents for 2015 and the first-ever reduced fare for riders of limited means.

Under existing state law, the Metropolitan King County Council can consider an ordinance creating a transportation benefit district, funded by a potential annual vehicle fee of up to $100 and a temporary sales tax of up to two-tenths of cent.

The ordinance proposed today calls for creation of a King County Transportation District that would ask voters to approve amounts less than the full funding authority:

Together, the estimated $130 million a year is similar to the estimated $140-$150 million that would have been raised through the motor vehicle excise tax in the statewide package stalled in Olympia. The impact to the average household in King County would be just over $11 a month.

Under the proposal, 60 percent of the revenues – about $80 million ­– would be distributed to Metro Transit for bus service, with 40 percent – about $50 million – to fund roads and transportation needs in cities and in unincorporated King County, with allocations based on population.

The proposed revision to fares includes an across-the-board 25-cent fare increase in 2015, and a reduced fare of $1.50 per trip for qualifying low-income riders who use an ORCA card. The proposal would ensure that users of the Metro system are doing their part to preserve bus service.

The proposed increase was already part of Metro’s long-range financial plan, and would be the fifth time since 2008 that Metro has raised fares to help preserve service. It would raise an estimated $6.6 million annually, starting March 1, 2015.

The reduced fare would help offset the cumulative impacts of increases in fares and the sales tax. It would be available to riders with incomes at or below 200 percent of the federal poverty level and would require the use of an ORCA card. Cash would not be accepted for reduced-fare payment on buses. To develop the most accessible and cost-effective means of determining program eligibility, King County will work with local service providers and state agencies.

The proposal builds upon the recommendation of a 21-member advisory committee, representing a broad cross-section of interests, which unanimously urged that fares be kept as affordable as possible to ensure continued access to bus service and jobs for riders of all income levels.

Service cuts on the horizon 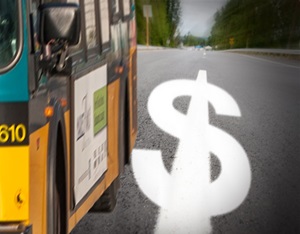 Metro Transit has created more than $800 million in reforms and efficiencies over the past five years, in order to hold off drastic cuts to service.

With the expiration of the temporary, two-year $20 Congestion Reduction Charge in June and the draining of reserve funds, Metro needs an estimated $75 million in annual revenue to keep service on the road and purchase replacement buses or it must cut up to 17 percent of service.

Metro has outlined a proposal to cancel 74 bus routes and reduce and revise another 107 routes to live within reduced revenues. Three months of public meetings are underway prior to the County Council’s consideration next spring of any service cuts.

Since 2008, funding for county roads has shrunk by over a third as a result of annexations, lower property valuations and a decline in state gas tax revenues.  The county Road Services Division has been forced to reduce staffing and there are now 40 percent fewer workers to maintain and preserve the county road network. As a result, the roads system in unincorporated King County is deteriorating, service levels are reduced, and fewer roads can be plowed and kept open for travel and restoration of utilities this year should a regionwide storm strike.

Unincorporated King County roads are estimated to carry more than one million vehicle trips each day.

Metro’s proposed cuts are unprecedented in the agency’s 40-year history, would potentially reduce ridership by 14 million a year, reverting the agency to 1997 service levels. According to Metro’s service guidelines, the agency should be increasing bus service by 15 percent. Instead, the current proposal details up to 17 percent in cuts. Another 150 daily bus trips between West Seattle and downtown Seattle – buses that ease construction congestion during the Alaskan Way Viaduct project – also are at risk of being canceled in June when state funding ends.

In October, Metro carried 412,000 average weekday rides, its second highest ever. The agency is nearing the annual record of 119 million riders last seen in 2008.

The Council will deliberate on the specific proposal to place on the ballot, and when to put it before voters.

What regional leaders are saying

“King County has stepped up to every challenge set before us. We’ve done everything within our means to keep people moving. We are out of time for a statewide solution that includes a local option. We must move forward on our own to save Metro bus service.” – King County Executive Dow Constantine

“To save King County from traffic gridlock and overcrowded buses, we must move beyond the gridlocked negotiations in Olympia and act now. Preserving the ability for our workers, students, elderly people and people with disabilities to get around the region on transit, using safe roads and bridges is critical for the economic viability and livability of our community.” – King County Council Chair Larry Phillips

“Saving our bus service is a top priority for me and my administration. At a time when demand is reaching record levels and continuing to grow, Seattle and the region need more, not less transit service. The time has come to act locally. Metro is our transit workhorse and we must do whatever we can to keep the service running.” – Seattle Mayor Ed Murray

“We have done everything possible to convince our state legislature to pass a transportation package and they have failed to act. We, as local leaders, are united in preventing Metro bus service cuts, and in preventing further deterioration of our roads and bridges. We must act now to have the transit service and transportation system that is critical to our region's prosperity and livability.” – Seattle City Councilmember Tom Rasmussen, Transportation Committee chair

“Transparency and communication during this process will be essential. As Vice Chair for Regional Coordination I will be working really hard to listen to the public and our regional partners as the council deliberates.” – King County Council Vice-Chair Jane Hague

“King County has worked hard to make sure we’re using the taxpayer dollar wisely. We’re delivering services more efficiently than ever. But no amount of savings can make up for the recession’s toll on our revenues. This proposal is reasonable. New funding must be secured to keep our region – and our economy – moving.” – King County Council Vice-Chair Joe McDermott, Budget and Fiscal Management Committee chair

“A strong, integrated transportation system is essential to support a vibrant and growing economy in King County. I look forward to crafting a balanced proposal to invest in transit, city streets, and rural roads to keep our region's economy growing. We need to ensure that the transportation package presented to voters is effective, accountable, and fair. Executive Constantine's proposal is an excellent start toward achieving these objectives. I look forward to working together with the broad coalition supporting this effort to ensure that we keep King County moving.” – King County Councilmember Rod Dembowski, Regional Transit Committee chair

“As the prime sponsor of the legislation creating the Low Income Fare Advisory Committee, I am pleased the Executive is advocating the creation of a Reduced Fare to offset the impact of both a proposed fare increase and a proposed increase in sales taxes. It is critically important that we continue to provide bus service to the transit dependent members of our community.” – King County Councilmember Larry Gossett

“Making transit more affordable for working people is both innovative and the right thing to do. A Reduced Fare will help tens of thousands of our neighbors get to work and school, and I urge the County Council to take swift and positive action to enact this proposal.” – Alison Eisinger, Executive Director, Seattle/King County Coalition on Homelessness