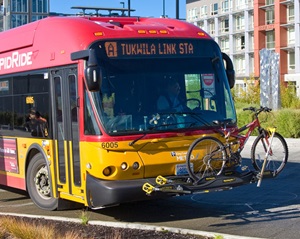 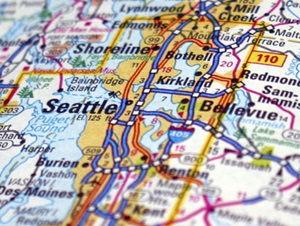 King County Metro Transit ridership surged yet again in the first half of 2014 as the popularity of its RapidRide service continued to exceed expectations.

"The stunning success of RapidRide shows the increasing demand for public transportation in our region," said King County Executive Dow Constantine. "That's why I have committed Metro and Sound Transit to full integration of our light-rail and bus services, to get the most frequent, fastest, and most reliable transit service for every dollar."

The A Line—the first RapidRide line launched in 2010 along Pacific Highway South/International Boulevard—led the way with a 79 percent increase in growth since its inception, beating five-year growth projections by more than two years.

About 63 percent of RapidRide's capital cost, including buses and station improvements, was funded by a variety of federal and state grants.

A strengthening economy is just one reason for the surge in ridership. RapidRide received an 80 percent overall satisfaction rate in recent rider surveys with high marks also given for frequency, reliability, and other amenities. RapidRide has been successful in providing improved connections with Link, Sounder, and other Metro, Community Transit, and Pierce Transit services throughout the County.

Metro General Manager Kevin Desmond notes the system as a whole also continues to gain strength. "Metro ridership is now firmly in record territory, which shows we have positioned our system to support our region's economic recovery."

Preliminary data shows that Metro's system grew by 1.7 percent in the first half of 2014 compared to the same period last year. Metro provided over 60 million total rides, or about 403,000 trips each weekday.

Desmond notes, however, that the loss of 161,000 hours of service in September will likely lower overall ridership as Metro closes out the year with service reductions resulting from its ongoing funding crisis.