King County Executive Dow Constantine announced the newly-constructed South Park Bridge will open June 30. The previous drawbridge, built in 1931, was closed and dismantled in mid-2010 due to safety concerns. 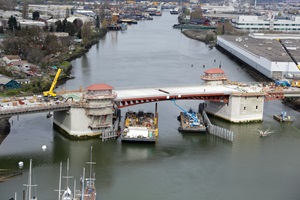 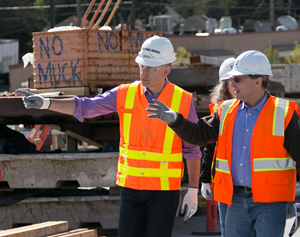 King County Executive Dow Constantine announced the newly-constructed South Park Bridge will open June 30. The previous drawbridge, built in 1931, was closed and dismantled in mid-2010 due to safety concerns.  Executive Constantine secured funding from local, state, and federal agencies for the bridge’s reconstruction, including $34 million from a grant program operated by the U.S. Department of Transportation. A coalition that included King County, City of Seattle, Port of Seattle, Washington state, Puget Sound Regional Council, businesses, labor, community representatives, and elected officials from across the region came together to support the successful fundraising effort.

The new bridge is expected to carry 20,000 vehicles and nearly 3,000 heavy-duty trucks each day. It will also carry an estimated 10 million tons of freight each year, including aerospace parts to local Boeing facilities.

"I made a promise five years ago that we would build a new, safer bridge to connect our industrial heartland to the rest of King County – and we’re ready to deliver," said Executive Constantine. "Not only will this help local manufacturers and family-owned businesses, it will reunite working communities in the Lower Duwamish area."

The opening ceremony and celebration will begin at 3 p.m. on June 29. The bridge will open the following day.

"The opening of the new South Park Bridge will be a long-awaited community celebration," said King County Councilmember Joe McDermott, who represents the area. "This project is a testament to the South Park community and our ability to get things done by working across jurisdictions for a common goal.”

The complex construction project required large-scale excavations to lay the foundation and install piers. Each span of the drawbridge was brought in by a massive floating crane, and attached to the bridge with more than 1,000 large bolts. Crews installed more than 750,000 feet of electrical wiring – enough to stretch from South Park to Yakima. It required an estimated 27,600 cubic yards of concrete, enough to fill more than 2,700 concrete trucks.

The new bridge was engineered to be energy efficient. Even though each drawspan weighs 3 million pounds, they are so precisely balanced that opening the drawbridge requires approximately the same amount of horsepower needed to drive a Toyota Prius.

To learn more about the South Park Bridge, visit www.kingcounty.gov/southparkbridge.