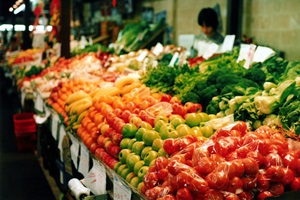 "King County residents spend nearly $6 billion on food each year, yet less than 2 percent goes to local farms,” says the Executive. “By better connecting local farms and communities, we can increase access to healthy, affordable foods, support our farmers, and create a farm-to-plate pipeline."

Executive Constantine has asked the Kitchen Cabinet to meet over the summer and fall and emerge with targets and measurable actions that governments, businesses, and non-profits can take to achieve a more resilient, thriving local food system that is readily available to all communities.

"In the 25 years I've farmed in the Snoqualmie Valley, I've never seen anything close to the current interest in promoting local-organic agriculture," says Haakenson of Jubilee Farm. "Both the citizens of King County and their elected leaders are calling for greater availability of local produce. I believe the Executive's Local Food Economy Initiative is a dramatic step in achieving this goal."

The initiative calls for expanding the local food economy by:

The initiative is also intended to address equity and social justice concerns. A number of low-income communities in King County—where there are rising rates of obesity and diabetes—have limited access to fresh fruit and produce.

"More than 86,000 children and their families in our County don’t have access to enough nutritious food for an active and productive life," says Mackie of Macrina Bakery and Cafe. "Having the accessibility and logistics to locally grown produce will make a great impact on the health and positive productivity of our community."

Ideas for improving access to local food could include strengthening connections among regional food producers and local food retailers, partnering with community organizations to promote health and wellness, and building “farm-to-plate” connections through public institutions like schools and hospitals.

With PCC Natural Markets, Ruby understands how weather events elsewhere can affect prices here. "We need to be less reliant on areas like California for our food, more able to withstand harsh weather events here, and have the capacity to produce more food for other regions affected by climate events," he says.

The Kitchen Cabinet's work will be informed by prior studies, such as King County's 2009 FARMS Report and the City of Seattle's Food Action Plan.


Building on prior local food efforts

The initiative builds on the work of groups such as the King County Ag Commission, Regional Food Policy Council, and the Farm/City Roundtable, and will carry forward recommendations from the recently concluded Local Farm and Food Roundtable—a stakeholder process convened by King County, City of Seattle, and Pike Place Market.

More recently, King County partnered with the City of Seattle on a program to use revenue generated from selling rural development rights to preserve more farmland—especially the active farms that supply Seattle’s farmers markets and restaurants.

Executive Constantine first announced plans for his Local Food Economy Initiative in his State of the County address in February. There, he also announced the hiring of King County’s first food economy program manager, Lilly Simmering, who is managing King County’s role in the initiative and supporting the cabinet.