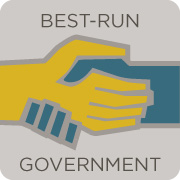 "By investing in projects that pay for themselves over time through lower utility bills, we can meet our climate targets faster and save money at the same time," said Executive Constantine, who will transmit his 2015-2016 budget proposal to the King County Council on Sept. 22.

As part of operating King County as a best-run government, the Executive’s budget proposes a Fund to Reduce Energy Demand that would provide County agencies with a new tool to meet long-term goals for both energy reduction and climate change. Under the program, the County could issue bonds to provide loans to departments for equipment upgrades that reduce the use of energy or other resources. The savings on utility bills would be used to pay back the bonds. Additional bonds could be issued to fund future energy, water or waste-reduction projects and initiatives – creating even more savings.

The Executive's proposed budget will include loans totaling $2.2 million for eight energy and water efficiency projects across five county agencies. About 20 percent of the total project costs are expected to be repaid through utility rebates.

The combined projects would reduce the County's output of carbon dioxide by nearly 1,000 metric tons every year.

"Reducing energy demand has the potential both to save taxpayers money and reduce King County's impact on the environment, particularly our carbon footprint," said King County Council Chair Larry Phillips. "I look forward to reviewing this proposal as part of our 2015-2016 budget process.”

Project loan periods are for 10 years. Program savings will be realized from the very first year, even after the cost of borrowing. County agencies will have the benefit of a life-cycle cost-analysis tool that can help them determine when it makes good financial sense to make investments that will reduce resource use.

"This program helps departments overcome the barrier of having limited dollars to invest in projects that can save money through reduced utility bills," said Christie True, director of the King County Department of Natural Resources and Parks.

"If a project can pay for itself through utility savings, even considering the cost of borrowing, it makes sense to begin capturing savings today and be cash-flow positive, rather than waiting until other money is available."