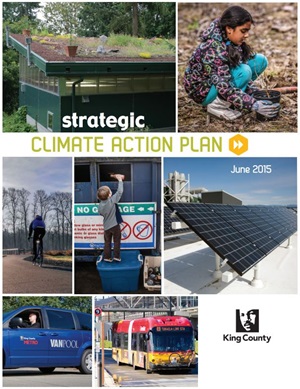 After the hottest June in our region's history, with record-low river flows and growing threats of wildfires, King County Executive Dow Constantine transmitted his five-year action plan on climate change to the King County Council.

“Pledges and good intentions won’t get us to our climate goals or meet our commitment to future generations. The Strategic Climate Action Plan maps out clear targets and priority actions to address climate change in collaboration with our cities, energy providers, businesses, and residents.”

The 2015 Strategic Climate Action Plan will serve as King County's road map to achieve ambitious targets to reduce greenhouse-gas (GHG) emissions that were adopted with King County’s 39 cities last July. It also outlines what King County will do to help prepare the region for the impacts of climate change, and ensure that the County continues to lead by example.

The plan builds upon recent progress while outlining ambitious commitments and actions that will:

The plan will be considered this summer for adoption by the King County Council.

Climate change is one of the paramount challenges of our generation

In King County, climate change affects natural resources such as salmon and forests as well as public health challenges associated with heat and wildfire, and economic impacts related to increasingly extreme weather and flood risks.

The Strategic Climate Action Plan builds on King County’s long track record of innovation, leadership, and investment in reducing greenhouse gas emissions and preparing for the impacts of climate change. For example:

For example, investing in expanded commuter options and weaving together transit with land use will reduce GHG emissions while improving access to work, education, and health care.

As highlighted throughout the 2015 SCAP, King County recognizes that partnership is essential for the success of combatting climate change and is calling on the region’s public, private, and civic sectors to also take action.