Elected leaders representing major urban counties across the United States are signing a declaration written by Executive Constantine that welcomes Syrian refugees. The declaration closes with a call to action: “This is, above all else, a humanitarian crisis—one to which we as metropolitan regions are willing and able to respond." 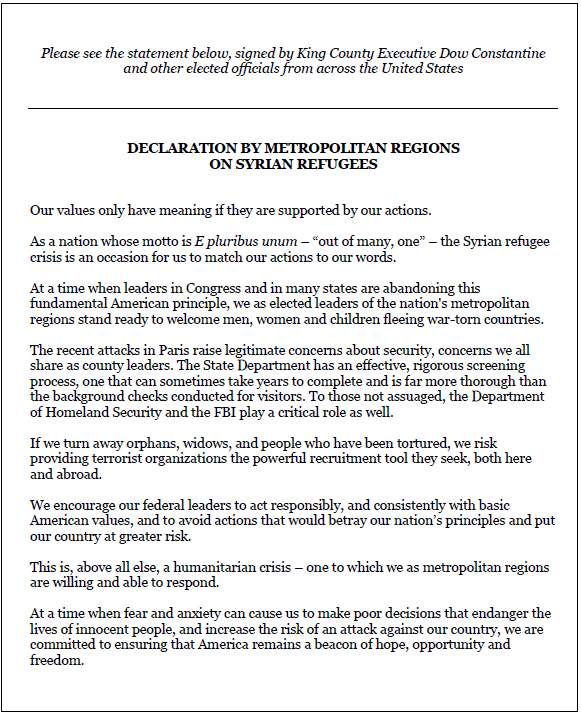 The declaration “encourages federal leaders to act responsibly and consistently with basic American values, and to avoid actions that would betray our nation’s principles and put our country at greater risk.”

Within 48 hours, officials in 10 major urban counties in the Northeast, Midwest, Southwest, and Northwest signed the Executive’s declaration.

“Local elected leaders from across the country are joining me to welcome refugees fleeing war and tyranny,” said Executive Constantine. “We stand united as America's metropolitan regions to uphold our tradition of compassion and the recognition that we are a proud nation of immigrants.”

The initial metropolitan regions to sign the declaration are:

Between 100 and 200 Syrian refugees are expected to arrive next year in Washington state, with about two-thirds likely to live in King County. About 40 percent of newly arrived refugees are younger than 18.

Most of the initial relocation services are provided by federally funded caseworkers. King County provides health screenings and connects them with a doctor so they can be healthy and productive residents. The county also helps newly arrived residents sign up for affordable health care, reduced-fare transit passes and other income-eligible programs that help them succeed.

The declaration closes with a call to action:

“This is, above all else, a humanitarian crisis—one to which we as metropolitan regions are willing and able to respond.

“At a time when fear and anxiety can cause us to make poor decisions that endanger the lives of innocent people, and increase the risk of an attack against our country, we are committed to ensuring that America remains a beacon of hope, opportunity and freedom.”

Exec: 'This is when we demonstrate that our actions reflect our principles'