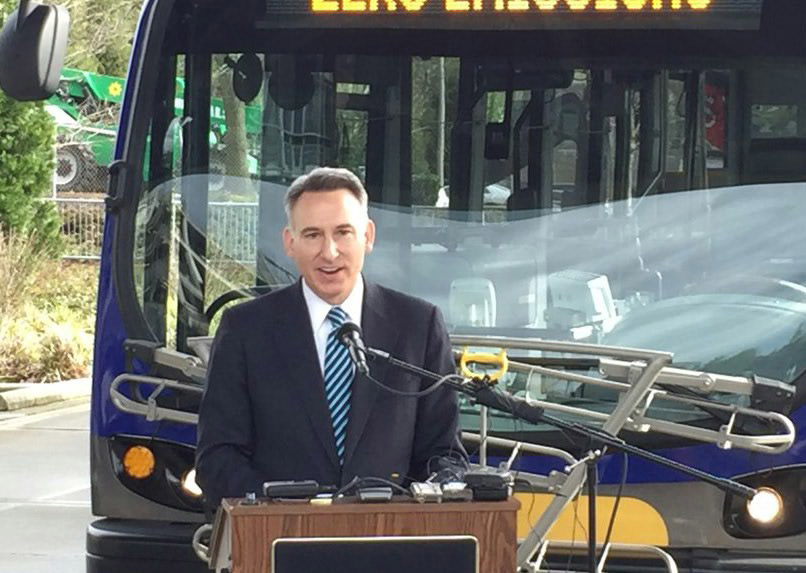 Executive Constantine unveils a Proterra all-electric bus, one of three that Metro Transit will be testing this year on Eastside routes

King County Executive Dow Constantine today launched Metro Transit's first all-electric battery-powered buses in Bellevue, adding to what is already one of the greenest fleets in the United States.

"We're taking advantage of the latest clean-energy technology to achieve our goal of an all-electric and hybrid fleet in three years," said Executive Constantine. "Riders on the Eastside will have the opportunity to try out our all-electric, zero-emission buses that demonstrate our commitment to reducing fuel costs and carbon emissions."

The battery bus launched today is the first of three that Metro will test this year. Executive Constantine set a goal for Metro to increase transit service through 2020 with no net increase in greenhouse gas emissions.

Metro's three battery buses will operate on Bellevue routes 226 and 241, serving some of the county's densest job centers, including the Microsoft Corporate Campus and downtown Bellevue. The routes, which also serve the Bellevue Transit Center, start and end at the Eastgate Park-and-Ride, where the battery charging station is located.

The 38-seat prototype buses, manufactured by Proterra Inc., have a composite body and can travel 23 miles or more between charges. Batteries take 10 minutes or less to charge. The prototype buses are expected to get the equivalent of 15 miles per gallon more than a regular hybrid bus.

The automated, state-of-the-art charging station at Eastgate requires minimal work by the driver. Sophisticated software helps position the bus below a charging head that transmits electricity wirelessly. Recharging the battery takes 10 minutes or less, and when complete the driver is alerted and drives away.

According to data collected by other transit agencies operating the Proterra bus, the battery-powered vehicles generate a cost savings of 49 percent per mile compared to a hybrid bus, and a 40 percent savings over a diesel bus.

Metro will test the performance and efficiency of the new technology for up to a year on local streets and roads to determine whether battery-electric buses can be a future replacement option for its remaining diesel-powered coaches.

The three battery buses were paid for in part with a $4.7 million federal grant. Metro is pursuing $3.3 million in additional grants to buy six more battery buses and a second charging station, which would enable Metro to completely convert the two Eastside bus routes to 100 percent electricity.

With the three new battery buses, nearly 70 percent of Metro's fleet is now comprised of either all-electric or hybrid-electric vehicles.

Metro has long been at the forefront of environmentally friendly buses, starting in 2004 with the purchase of hybrid-electric, 60-foot coaches that formed the largest articulated hybrid-bus fleet in the United States. That purchase was followed by the acquisition of 25 all-electric, zero-emission metropool commuter vehicles and 174 electric trolleys capable of traveling off-wire. Metro's trolley fleet is now the second largest in the nation.

We're taking advantage of the latest clean-energy technology to achieve our goal of an all-electric and hybrid fleet in three years. Riders on the Eastside will have the opportunity to try out our all-electric, zero-emission buses that demonstrate our commitment to reducing fuel costs and carbon emissions.

We're extremely pleased our city was picked for the introduction of Metro's all-new, battery-powered bus. The location is appropriate because Bellevue is not only an innovation hub, it's a regional transportation hub. We see electric vehicles as an important way to reduce transportation-related emissions on the Eastside.

King County has a record of pushing the envelope with clean transit -- first introducing hybrid-electric buses and now forging ahead with battery bus technology. These investments will cut greenhouse gas emissions and other dangerous air pollutants that compromise public health while also reducing noise pollution. This is an important first step, and we're eager to see Metro transition to a 100 percent green transit fleet in the coming years.