Building on the progress Metro Transit has made to decrease the number of driver assaults, Executive Constantine proposed installing cameras in all Metro buses. He will request funding in the supplemental budget needed to install cameras in 100 percent of Metro’s bus fleet.

King County Executive Dow Constantine proposed installing cameras on all Metro Transit buses, building on the progress the agency has made to dramatically decrease the number of driver assaults in recent years.

Metro currently has cameras in 44 percent of its buses, which has contributed to the agency cutting the number of drivers who are assaulted by more than half since 2008. Executive Constantine will request funding in the supplemental budget needed to install cameras in 80 percent of Metro’s bus fleet by early 2019 and 100 percent by early 2021.

“It is intolerable that anyone would harm one of our dedicated, professional drivers who work hard each day to safely and reliably get passengers to their destinations," said the Executive.

“I’m proud of the work we’ve done in recent years, in partnership with our unions, to significantly reduce the number of drivers who are assaulted. Now it’s time for us to build on our progress, investing more in what works. That’s why I am requesting the funds needed to install cameras in every Metro bus as soon as possible.” 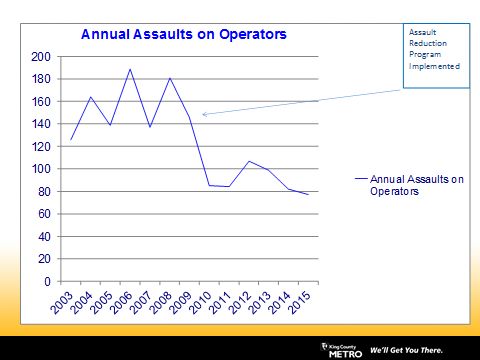 The number of drivers assaulted has decreased by more than half since Metro launched its Operator Assault Reduction Program in 2009, from 180 assaults in 2008 to 77 assaults in 2015.

Metro has improved driver safety by:

Metro has already installed cameras on more than 600 of its 1,382 buses. The most recent buses purchased by Metro — including electric trolleys, RapidRide models and the newest 60-foot-long buses — are coming installed with camera systems.

Executive Constantine directed Metro to calculate how much it will cost to acquire, install and retrofit cameras for the remaining 770 buses.

The proposal is subject to approval by the King County Council.