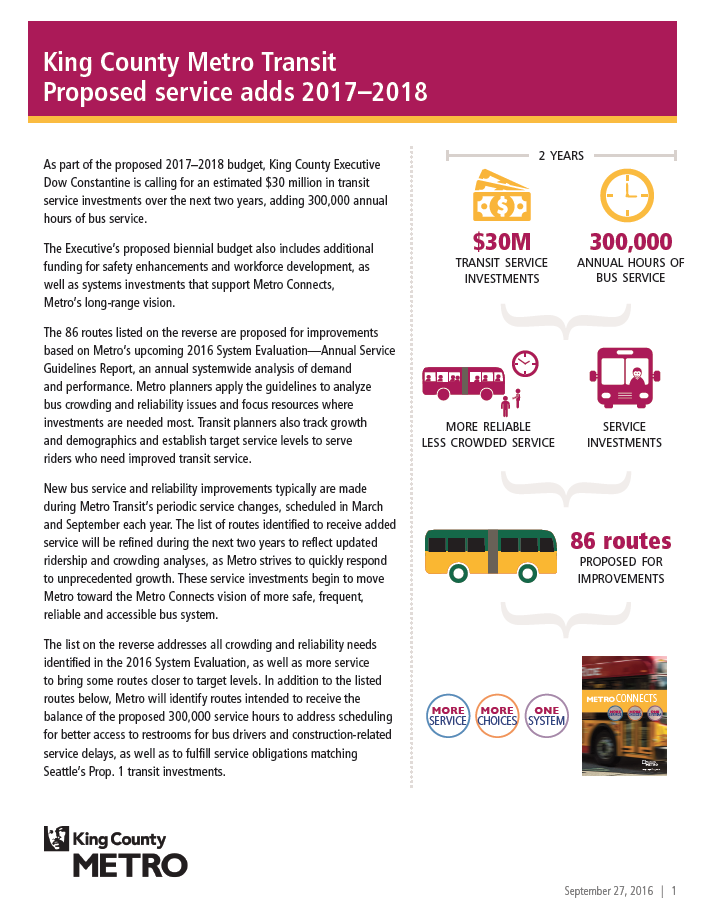 Download (PDF)
If the document does not open in your browser, right-click and "Save as".

“As King County’s population grows, so does demand for frequent and reliable transit,” said Executive Constantine. “These investments provide added service where riders really need it, especially riders who rely on transit most. We also make long-term investments to ensure Metro Transit can grow sustainably right along with our region.”

Investments in the 2017-2018 proposed budget include:
• Improvements in weekday service to the RapidRide D, E, and F lines.
• Routes serving the I-90 corridor – such as routes 212, 216, 217, 219 – and routes to Ballard such as the 15X, 17X, 18X and RapidRide D Line, to reduce crowding or help ensure they operate on-time despite congestion.
• To bring them closer to their target transit service levels, routes 60, 131, 150, 153, 156, 169, 180, 181, 183 and others would receive investments.
• Routes 101 and 102, serving riders between Renton and downtown Seattle, ranked high for needing more service to address crowding and reliability deficiencies and to meet target service levels.
• Dozens of other local and commuter bus routes.

The list of routes proposed for added service will be refined during the next two years as ridership continues to change and updated ridership and crowding data is available, which could revise where more service is needed most.

Under Executive Constantine’s Community Mobility Contract with the City of Seattle, proposed county investments in transit service within the city limits in turn allow the city to redeploy service hours funded by Seattle Proposition 1 funds. The county’s current contract with Seattle is for an estimated 270,000 hours of Metro bus service annually from 2015-2017 and can be renewed for an additional three years.

Metro Transit typically makes service and reliability improvements during periodic service changes, scheduled in March and September each year. Detailed service hour investments as a result of the 2017-18 budget will be refined and finalized in the months leading up to when the changes are implemented.

The Executive transmitted his proposed 2017-2018 budget to the King County Council on Sept. 26. The County Council expects to adopt a final budget by Thanksgiving.

As King County’s population grows, so does demand for frequent and reliable transit. These investments provide added service where riders really need it, especially riders who rely on transit most. We also make long-term investments to ensure Metro Transit can grow sustainably right along with our region.