Youth ridership on buses, trains, and streetcars dramatically increased this past summer when King County Metro and Sound Transit offered a reduced-fare ORCA card. Metro distributed twice as many ORCA Youth cards than it initially expected.

The number of young people who rode Metro and Sound Transit buses, trains, and streetcars surged this past summer during a reduced-fare pilot project launched by King County Executive Dow Constantine.

“The impressive success of our ORCA Youth program confirms that the next generation has fully embraced reliable transit,” said King County Executive Dow Constantine, who is also a Sound Transit Board Member. “More young people than ever are choosing buses, trains, streetcars, and water taxis to get to their destinations – demonstrating strong future demand for a seamless mass transit system."

The pilot project offered 50-cent fares for Metro buses and $1 fare on Sound Transit light rail and buses between June and September. Metro distributed more than 11,000 free ORCA Youth cards during the promotion. The city of Seattle also issues free ORCA Youth cards to students who qualify for free or reduced lunch and whose card expire during the summer.

Nearly two-thirds of 108 young passengers who participate in a customer survey said they rode transit more often because of the reduced summer fare.

Executive Constantine launched the program to make it easier for young residents – particularly those who have limited transportation options – to take transit to jobs, internships, camps, and other activities during the summer, when youth ridership has historically declined.

Five school districts in King County provide students with free ORCA cards as part of their student transportation programs, but those cards are deactivated when the academic year ends.

Metro staff participated in 35 community events and went to schools throughout the region – including Seattle, Bellevue, Kent, and Auburn – to help students sign up for the program. ORCA Youth cards are still available online for passengers between the ages of 6 and 18.

King County Metro and Sound Transit are evaluating future options for the ORCA Youth program based on last summer’s results.

Metro is participating in two state-funded pilot programs in 2018 to encourage youth ridership by distributing free ORCA cards for summer to students who qualify for free or reduced school lunches. One program involves Metro and transit agencies in Pierce and Snohomish counties while the other will focus on the Highline and Lake Washington school districts. 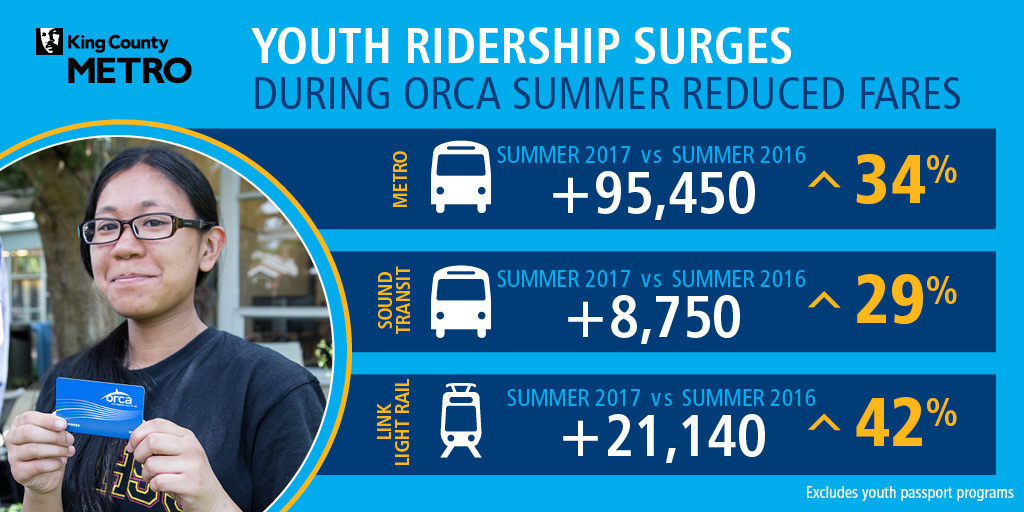 The impressive success of our ORCA Youth program confirms that the next generation has fully embraced reliable transit. More young people than ever are choosing buses, trains, streetcars, and water taxis to get to their destinations – demonstrating strong future demand for a seamless mass transit system.

This program encouraged youths around our region to take advantage of all that transit has to offer. It helped young people enjoy a summer of greater freedom and opportunity while planting seeds for them to become lifelong transit riders.