Under the direction of Executive Dow Constantine, King County is partnering with tribes, cities, state and federal agencies, and property owners on both emergency and long-range actions to ensure the survival of the native kokanee salmon after a sudden, alarming decline in returning spawners.

Executive Dow Constantine today was briefed by staff on emergency actions that King County and partners are taking to prevent the possible extinction of the Lake Sammamish kokanee salmon after a sudden, alarming decline in returning spawners that put the species at risk of extinction.

He also toured newly installed structures that will make it possible for more native salmon to pass under trails, highways, and private property so they can return to their ancestral spawning grounds.

“The native kokanee salmon are important to our ecosystem, to our culture, to our history – and we are taking every action we can to rescue them from the brink of extinction,” said Executive Constantine. “In addition to our emergency response, we are working with our partners to remove barriers to healthy restored habitat."

Many large pipes – known as culverts – that were installed decades ago in streams passing under roads, trails, and railroads are too small and too high above the stream channel for salmon to use to return to their native spawning grounds. Even if salmon swimming upstream can jump high enough to reach the culvert, the water flow is often so strong that it pushes them back out. 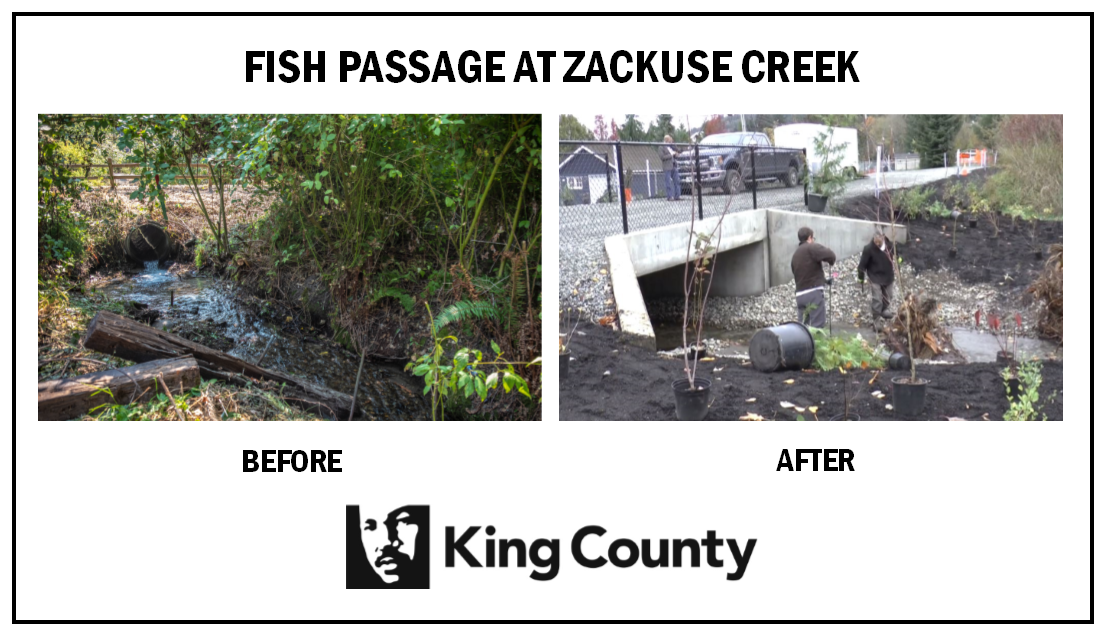 Executive Constantine included $12.5 million in the county’s 2019-2020 budget – recently approved by the King County Council – to design and build 36 projects that will remove barriers to 150 miles of healthy salmon habitat.

King County and other land managers are continuing their habitat-restoration work that will improve the health of the kokanee salmon population. The ongoing work includes:

Executive Constantine in May announced that the King County Department of Natural Resources and Parks would work with partners to enact a wide range of actions to prevent the possible extinction of the native freshwater kokanee salmon after a dramatic decline in spawners returning to streams around Lake Sammamish. County and state biologists counted fewer than 20 kokanee during the 2017 return, five years after they counted more than 18,000.

Based on recommendation by the Lake Sammamish Kokanee Work Group – an alliance of tribal and local governments, state and federal agencies, non-governmental organizations, landowners, and residents of the watershed – King County and partners are:

A species important to the bio-diversity of the region

In addition to being culturally significant, the native kokanee are important to the bio-diversity of the region. They have a unique genetic signature, having adapted over centuries to the unique Lake Sammamish ecosystem, making them impossible to replace. Genetic diversity makes the natural environment healthier and more resilient, which is particularly important in the face of climate change.

The kokanee run that occurs in November and December – known as “the late run” – is the only remaining native run. The two other native runs that historically occurred between late August and early November no longer occur because those kokanee have been extinct since the 2000s.

The native kokanee salmon are important to our ecosystem, to our culture, to our history – and we are taking every action we can to rescue them from the brink of extinction. In addition to our emergency response, we are working with our partners to remove barriers to healthy restored habitat.