The Lake Sammamish kokanee – a culturally and biologically significant salmon species – appears to be closer than ever to extinction. A work group created by King County has recommended a series of immediate and long-range actions to protect the salmon popularly known as “the little red fish."

A work group created by King County is taking emergency and long-term action to counter an alarming downward trend of Lake Sammamish kokanee, a native salmon population that appears closer than ever to extinction.

County and state biologists counted fewer than 20 kokanee in the most recent return, five years after more than 18,000 spawners returned from Lake Sammamish.

The survival rate for young kokanee has declined severely. 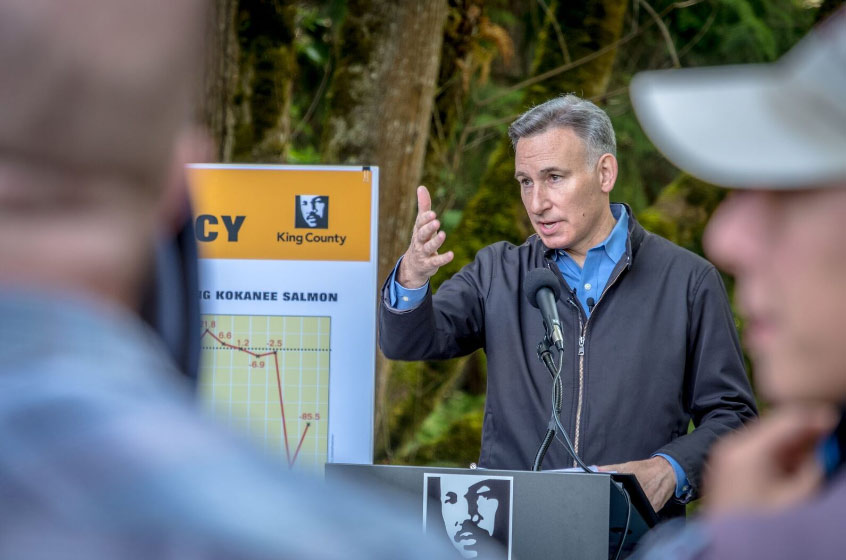 “The native kokanee salmon – important to our history, our culture, our environment – are facing new challenges that potentially threaten their very existence,” said King County Executive Dow Constantine. “Together with our partners, we will take new, immediate actions to protect the iconic species and continue our long-term work to create healthier salmon habitats throughout our region.”

Biologists are investigating a number of possible factors that led to the most recent dramatic decline, including the increasing frequency and magnitude of harmful high temperatures and low-dissolved oxygen conditions during summers in Lake Sammamish. They are also beginning to study the compounding effects of parasites, bacteria, and related diseases during these events.

The Lake Sammamish Kokanee Salmon Work Group – which King County created in 2007 to help guide strategies to protect the unique species – recommended a series of immediate and long-term actions:

For the past decade, the Kokanee Work Group – an alliance of tribal and local governments, state and federal agencies, landowners, and residents of the watershed – has worked together with the shared goal of a healthy, stable kokanee population.

The Work Group continues to make progress, with more than 18,000 spawners returning to Lake Sammamish during the 2012-13 run. But scientists are concerned that the new challenges have the potential to wipe out the remaining kokanee population unless immediate action is taken.

Working together to restore healthy salmon habitats throughout King County

King County and other land managers are continuing their habitat-restoration work that will improve the health of the kokanee salmon population. The ongoing work includes:

In addition to being culturally significant, the native kokanee are important to the bio-diversity of our region. They have a unique genetic signature, having adapted to the unique Lake Sammamish ecosystem, making them impossible to replace. Genetic diversity makes the natural environment healthier and more resilient, which is particularly important in the face of climate change.

The kokanee run that occurs in November and December – known as “the late run” – is the only remaining native run. The two other native runs that historically occurred between late August and early November no longer occur because those kokanee have been extinct since the 2000s.

The native kokanee salmon – important to our history, our culture, our environment – are facing new challenges that potentially threaten their very existence. Together with our partners, we will take new, immediate actions to protect the iconic species and continue our long-term work to create healthier salmon habitats throughout our region.