King County Metro will test battery-powered buses on longer routes that include steep hills, the next step for an agency that is considered a national leader in the transition to zero-emission transit.

King County Metro will soon begin testing long-range battery-powered buses that can travel more than 140 miles on a single charge, the latest milestone toward a zero-emission fleet.

The latest models can travel nearly six times farther than the fast-charge buses Metro currently has in its fleet. At that distance, the battery-powered buses could satisfy about 70 percent of Metro’s bus routes, reducing air and noise pollution throughout the region. 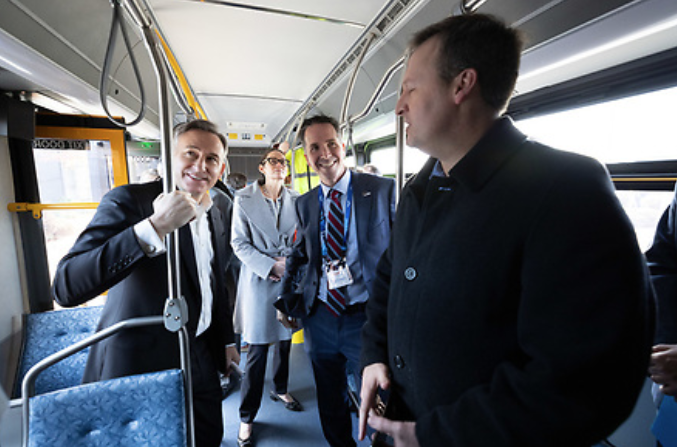 Executive Constantine joins staff and partners aboard one of the long-range battery-powered buses King County Metro will test.

“Leading the transition to zero-emission transit requires ingenuity and partnerships – and we have both,” said King County Executive Dow Constantine. “We are challenging manufacturers to create reliable battery buses that meet our service needs on long routes with steep hills. This test is the next step on our path to a clean, quiet fleet powered by renewable energy.”

Manufacturers will provide 40- and 60-foot battery-powered buses for the performance test. The buses will initially be operated out of Metro’s South Base in Tukwila. Metro has committed to prioritize deployment of new zero-emission buses on service operating from South King County, improving air quality and public health first in low-income and communities of color, which are most vulnerable to the public health impacts of air pollution.

King County Metro earlier this year became the first transit agency in North America to install a high-powered charging station at a base facility where recharging is combined with cleaning and maintenance. Short-range buses at Metro’s Bellevue Base can now fully recharge in much less time, which has made operations more efficient.

Metro is now building the infrastructure needed to recharge both short- and long-range buses to achieve its goal of operating a zero-emission fleet no later than 2040. King County is working with local utilities – Seattle City Light and Puget Sound Energy – to ensure that the batteries are charged with clean, renewable energy. 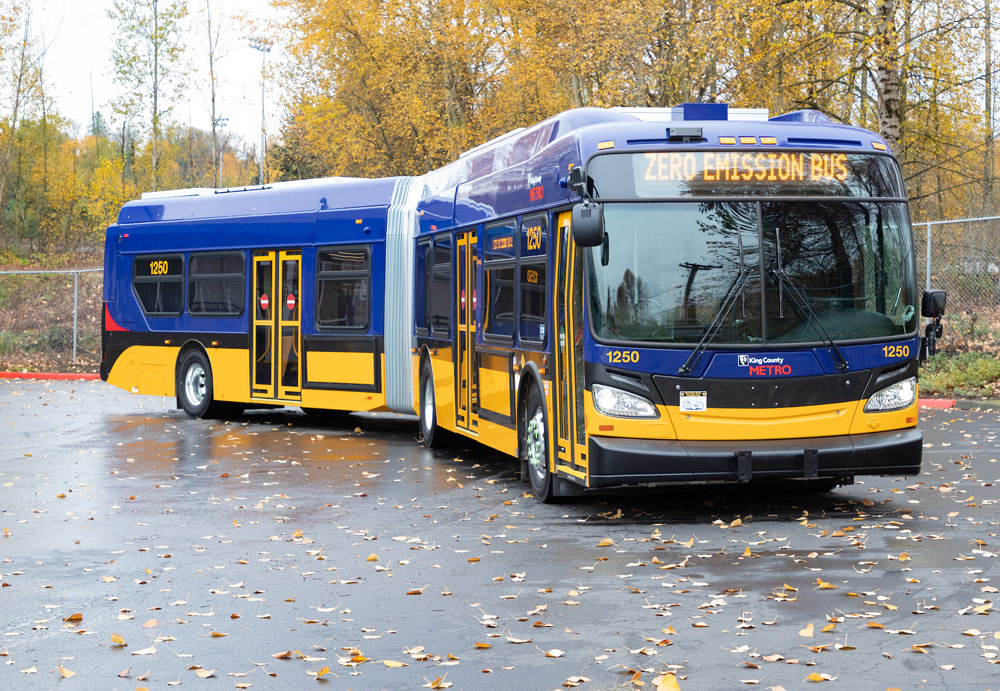 Two decades ago, King County Metro pushed the manufacturing industry to produce diesel-electric hybrid buses and now operates the largest fleet of its kind in the nation. Now it is using its purchasing power to demonstrate that there is strong market demand for quieter and cleaner battery-powered buses.

“Before committing fully to manufacturers, we first must take steps to test the performance of this fast-moving technology,” said Metro General Manager Rob Gannon. “Our goal is to trade up for a cleaner future that supports the health of the communities we serve.”

King County Metro was recently named the best large transit system in North America by the American Public Transportation Association, which cited the agency’s accomplishments in transitioning to clean, renewable sources of energy.

Leading the transition to zero-emission transit requires ingenuity and partnerships – and we have both. We are challenging manufacturers to create reliable battery buses that meet our service needs on long routes with steep hills. This test is the next step on our path to a clean, quiet fleet powered by renewable energy.

It’s an exciting change to see the new zero-emission, battery-powered buses operated out of South King County. The County’s commitment to clean energy will ensure we all live healthy lives, without compromising our high quality transit system.

Moving to a zero-emissions bus fleet is the smart way to improve the environment and build healthier communities, while providing great transit service. Electric buses have been a great success in my district in East King County and I applaud Metro Transit for expanding the electric bus fleet to South King County.

Before committing fully to manufacturers, we first must take steps to test the performance of this fast-moving technology. Our goal is to trade up for a cleaner future that supports the health of the communities we serve.

As one of our early adopter customers, King County Metro has provided invaluable feedback as we’ve worked to deliver a bus capable of meeting King County’s performance requirements. We look forward to continuing our partnership as they transition to a zero-emission fleet.

We are extremely proud to support King County Metro’s launch of its long-range battery-electric bus program. For over 40 years, New Flyer has worked in collaboration with the King County team to introduce and advance electric propulsion, starting with trolleys in the late 1970s. Since then, we have delivered over 1,500 buses to the Greater Seattle area, and as we look ahead to building a clean energy future, we couldn’t be more thrilled to stand alongside the visionaries leading King County into the next chapter of zero-emission transit.