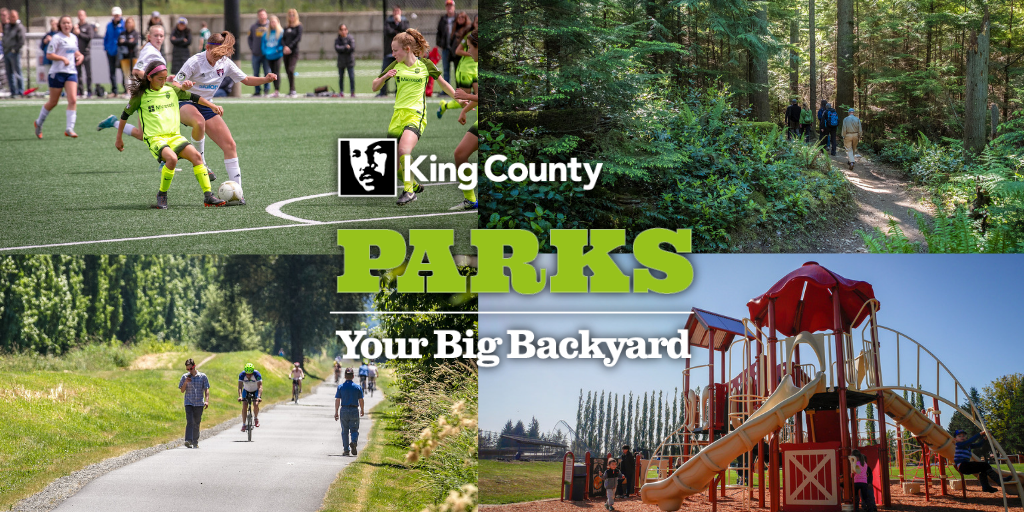 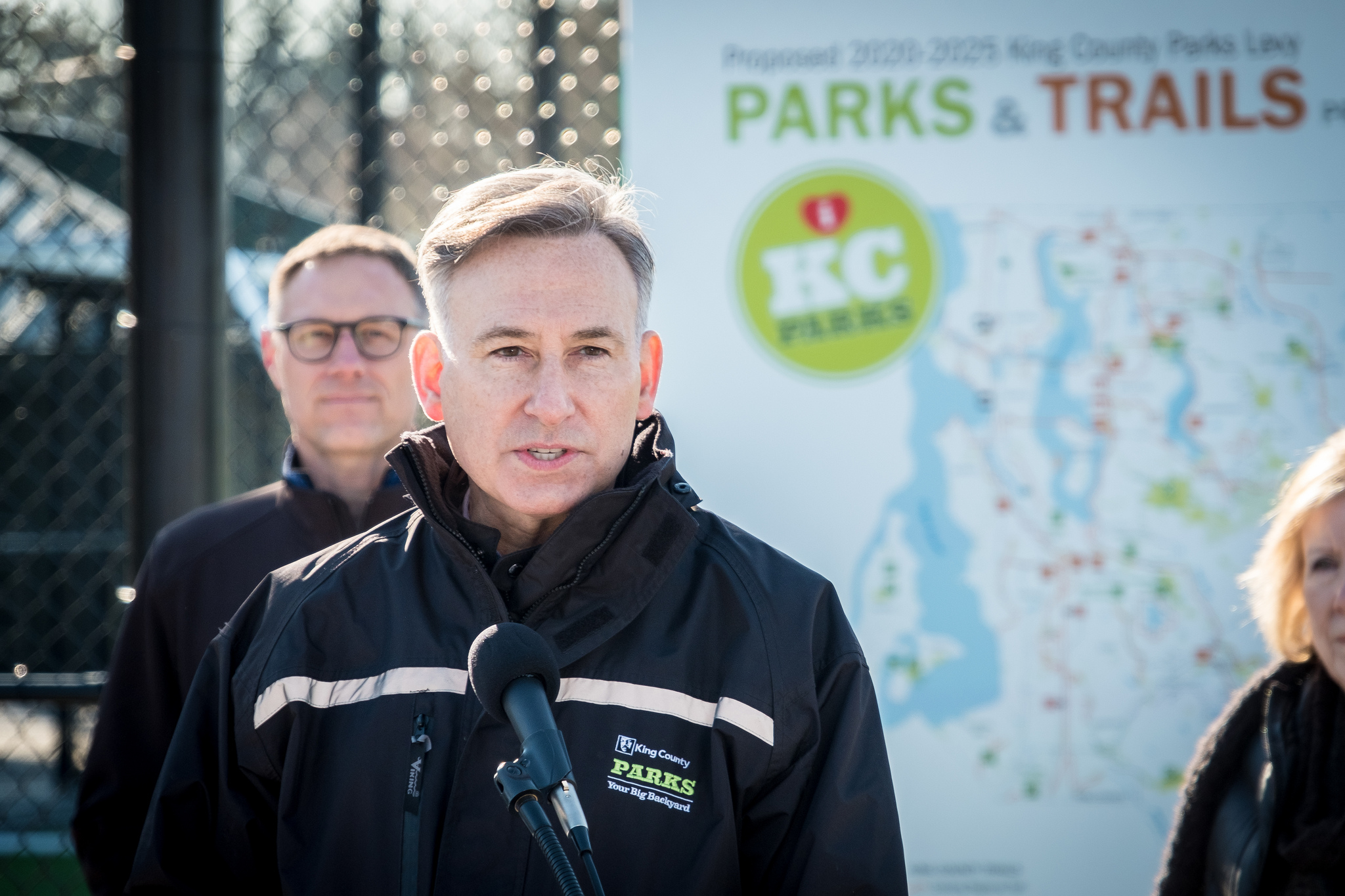 Executive Dow Constantine today announced his proposal to renew the current King County Parks Levy, scheduled to expire at the end of the year. His proposal for the August ballot would generate an estimated $738 million over the next six years to expand and connect regional trails, improve access to green space and recreation, and keep the county's parks and trails clean, safe, and open.

The current King County Parks levy – which voters approved in 2013 – will expire Dec. 31. On Feb. 21, Executive Constantine sent to the King County Council a proposal that will expand and improve access to the county's 200 parks, 175 miles of regional trails, and 28,000 acres of open space.

“This proposal isn’t just about access to parks and recreation – although that is plenty. It is about a generational investment in our environment,” said Executive Constantine. “The levy is entirely consistent with my priorities to restore and protect our rivers, forests, and farms, while also doing our part to tackle climate pollution. Voters have approved the Parks Levy three times since 2003. No matter how much things grow and change around here, our values stay the same, guiding us to support investments that make stronger, healthier, and happier communities.”

Highlights of Executive Constantine’s plan include: 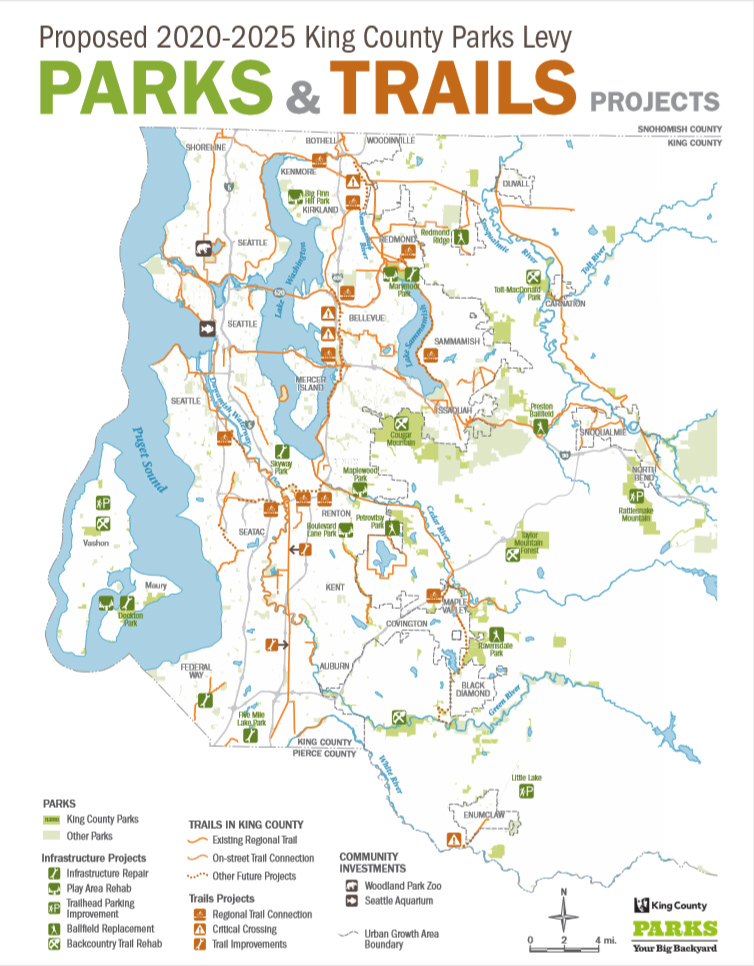 See where we plan to invest in parks and trails.

About 80 percent of King County Parks’ operational budget is funded by levy.

Under Executive Constantine’s proposal, about $60 million would be allocated to King County cities to support local parks and recreation; an additional $35 million would go for grants to cities to protect and acquire open space. It would provide Woodland Park Zoo with $36 million for conservation and environmental education programs for under-served youth. It would also provide $8 million to the Seattle Aquarium for construction of their new Ocean Pavilion.

Executive Constantine’s proposal would also provide continued funding for the Community Partnerships and Grants Program, which, over its 15-year existence, has created dozens of public amenities across King County with partners that contribute the necessary additional capital, in-kind resources, and volunteer time to develop new or enhanced facilities.

About $1 million per year would go toward equity-focused grants to increase access to and use of recreation facilities in communities that are currently underserved or face other barriers.

Some of the regional trails investments in the Executive’s proposed levy include:

The new levy ordinance will once again establish a Parks Levy Oversight Board, which reviews levy expenditures and confirms progress on Parks’ levy commitments. Appointed by the King County Council and consisting of one representative from each County Council district, the board meets annually to conduct its work.

In its most recent report, the existing Parks Levy Oversight Board determined that King County Parks consistently meets or exceeds its levy commitments.

This proposal isn’t just about access to parks and recreation – although that is plenty. It is about a generational investment in our environment. The levy is entirely consistent with my priorities to restore and protect our rivers, forests, and farms, while also doing our part to tackle climate pollution. Voters have approved the Parks Levy three times since 2003. No matter how much things grow and change around here, our values stay the same, guiding us to support investments that make stronger, healthier, and happier communities.

This proposal is an investment in the health of our families, our communities and our environment for decades to come. From activities to parks to preserving open space for generations, everyone in King County benefits from these programs and I’m proud to be a part of this work.

King County’s parks, trails, and open space belong to us all. Whether we live just down the street, or miles away – these unique and irreplaceable public spaces are ours to enjoy and preserve. This levy proposal will help to ensure our exceptionally beautiful trails, parks and open spaces are enjoyed for generations to come.

The hard truth is that while King County has invested in parks and open space, it hasn’t happened enough in communities with the greatest and most acute needs – where people and children cannot safely walk to a park to meet friends, de-stress, or kick a ball around. I’m pleased to see this King County Parks levy proposal makes a serious attempt to address these investment disparities.

King County’s parks, regional trails and open spaces provide opportunities for people from urban and rural neighborhoods to connect with nature and promote healthier, happier communities. The King County Parks levy is a high return investment in our communities to ensure that our parks are cared for and that the outdoors are accessible for everyone.

The King County Parks Levy supports Woodland Park Zoo’s commitment to create connections between animals and families from all backgrounds. These critical connections inspire the citizens of King County to cherish and protect our region’s wild spaces and creatures as we continue to be impacted every day by our changing climate. This levy helps us realize our mission to save wildlife and inspire everyone to make conservation a priority in their lives.

Last year more than 30,000 school kids from throughout King County visited the Aquarium, and we had more than 80,000 conversations with families on local beaches and rivers to help inspire conservation of Puget Sound. Investments in regional gems like the Aquarium and beautiful parks like Marymoor and Cougar Mountain are critical to the health of King County and will ensure vibrant communities for generations to come.

Forterra applauds King County for its ambitious and tireless efforts to create a network of parks and open-space that is second to none in the nation. Thanks to the generosity of the county’s people, and the vision of its leaders, in the last three years Forterra has spearheaded several major acquisitions of new parkland. One example is in Bothell, where the county, the city and the state all pitched in to secure the 90-acre Wayne Golf Course as a future park. Another example: the historic 155-acre Dyar estate in the Enumclaw Foothills, famous as a picturesque setting for weddings, now permanently protected as public greenspace.

We know that parks and trails are vital to the well-being of our communities and surrounding environment, and we are committed to continuing to advance green space accessibility alongside King County Parks.

The Parks Levy has been absolutely critical to our success in speeding the conservation of forests, trails, shorelines, and streams on Vashon Island. The acquisition funding has provided key matching funds, but more than that, the maintenance money has allowed for a huge increase in park use, mostly on back-country trails, and for major restoration efforts like that at Maury Island Marine Park. This community loves the Parks Levy!

The environmental benefits of parks and trails are a critical part of community health. These resources will help close long-existing gaps in funding and deliver quality of life opportunities that communities need to thrive.

King County's regional trails are a regional treasure whether you walk, roll, or bike. As we look to the future, connecting the network is key to realizing the potential of regional trails to help people get where they need to go. Everyone benefits from access to the trail, from a young child learning to ride to an 80 year old grandmother enjoying her bike en route to the grocery store. Trails bring us closer together.

The Weyerhaeuser King County Aquatic Center has been an economic driver in the Pacific Northwest since its inception. From the U.S. Olympic Dive Trials to NCAA Championships to youth events, it fills hotels in Federal Way and beyond. But, more importantly, it is a place where thousands of swimmers, young and old, have had the opportunity to compete in one of the country’s top aquatics facilities.

King County's Cougar Mountain Regional Wildland Park is a fantastic venue for trail runners and for the Cougar Mountain Trail Run Series, and we love working with and supporting King County Parks' continued stewardship of this and so many other lands as free-access recreational and resource conservation areas for everyone's enjoyment.

On behalf of the thousands and thousands of dog owners that love our dog park, Serve Our Dog Areas expresses its heart-felt appreciation to the King County Park system for nearly 24 years of support for our mission to steward and operate the Marymoor off-leash recreation area for the joyful recreational usage of regional people and their dog companions!

Having the Weyerhaeuser King County Aquatic Center facility for both the Pacific NW YMCA Region to hold championship meets for 600-700 YMCA swimmers from six states, plus the local Puget Sound Swimming Association (our western YMCA swim league) State championships for 400-500 youth swimmers each year is truly a blessing. Over the years, a number of our YMCA swimmers have gone on to become USA Olympians and even Olympic and world champions. But just as important has been the opportunity for thousands of young YMCA swimmers to gain greater health and skills to mold them into good citizens and KCAC has always been a high point in this development. We in the YMCA aquatic fields thank KCAC and all of your staff for the wonderful services you provide so professionally. Our appreciation will never be able to be enough.

With less than 30 velodromes in the United States, our community is fortunate that King County Parks has partnered with the Marymoor Velodrome Association to bring track cycling education and racing programs to our area for over 40 years.

Our connection to the outdoors is a fundamental part of our unique identity in Washington. This is especially true in King County, where we tell the weather by gauging whether or not we can see the Mountain in the morning, where locals flood to parks and nearby hiking trails every evening and weekend. That is why the Washington Wildlife and Recreation Coalition advocates for funding for outdoor recreation and habitat areas. We work to ensure that all Washingtonians—in King County and beyond—are able to enjoy and connect with the outdoors, whether they’re able to make it to the mountains or just go for a walk in their local park. We want all Washingtonians to benefit from the mental and physical wellness that comes with getting outdoors. We want all kids to do better in school. And we want everyone to enjoy that unique community connection that comes from running into neighbors on a walk in the park.