King County has developed its first-ever Wildfire Risk Reduction Strategy, a set of 12 recommended actions to improve preparedness, response, and recovery as the region experiences hotter, drier summers due to climate change. 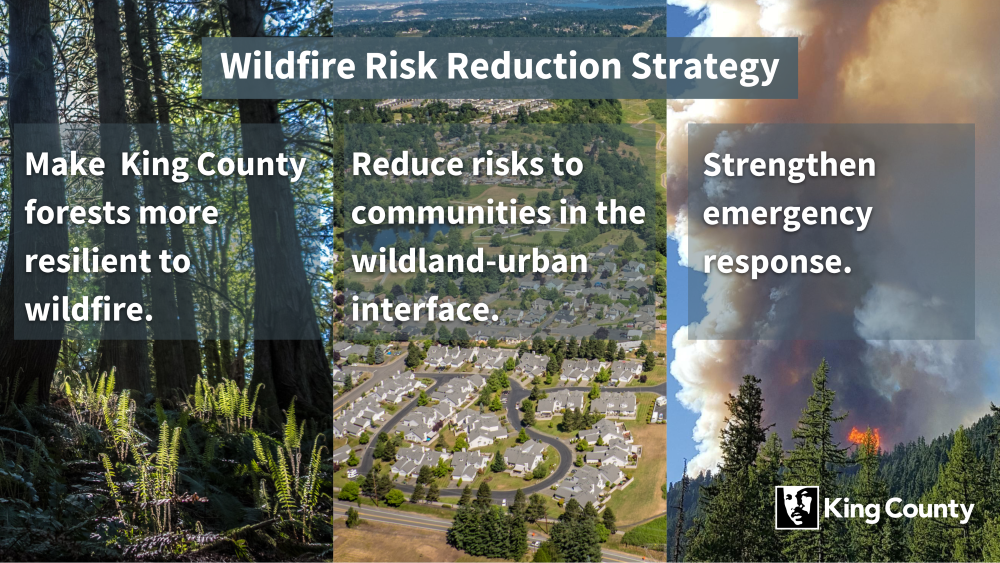 “As climate change increases the odds of a devastating wildfire occurring on our side of the Cascades, we are taking immediate action to better protect people, homes, and infrastructure,” said Executive Constantine. “Our experts and partners have delivered a solid set of recommendations that will strengthen our region’s wildfire resilience, response, and recovery.”

Firefighters responded to more than 700 brushfires in South King County between May 1 and Sept. 30, 2021. As conditions become more favorable for wildfire in Western Washington, the odds that a smaller fire becomes a large one that cannot be quickly contained increases, particularly if a fire occurs on a late summer day with strong winds from Eastern Washington.

King County in 2021 brought together representatives from communities in the wildland-urban interface, fire departments, local, state, and Tribal natural resource agencies, conservation agencies, utilities, and universities to develop the comprehensive strategy. It adopts best practices from other parts of the country while customizing the approach, recognizing the unique characteristics of local forests and the challenges of operating in densely populated areas.

Helping communities develop a preparedness, response, and recovery plan is critical to success given that few communities in the temperate Puget Sound region were designed with wildfire hazards in mind. For example, there are neighborhoods in the wildland-urban interface that have only a single access point for hundreds of households, making it difficult for residents to evacuate and for firefighters to respond.

The forest resilience actions are based on the principle that forests that have a diversity of tree species in different development stages – featuring a healthy mix of young and mature conifers and deciduous trees – are more resilient to wildfire and are better able to recover after a fire. The King County Department of Natural Resources and Parks will continue to work with forest landowners and managers to promote species and structural diversity in local forests.

Five of the 12 recommended actions would strengthen emergency responses to wildfire. One action would have King County fire departments, King County Emergency Management, and other partner agencies collectively make access to wildfire response resources easier and less expensive. That would include earlier access to helicopters for an initial attack.

Large-scale forest thinning and prescribed burns are common tactics throughout much of the Western United States for reducing forest density and fuel loads. However, experts say those actions are not effective or feasible in Western Washington forests. Applying those tactics here would fundamentally alter the dense, complex structure of westside forests and adversely affect ecological functions. Vegetation recovers quickly in the central Puget Sound region, so any risk reduction would be short lived.

King County's strategy recommends targeted fuel reduction around critical infrastructure and homes where it can reduce the potential for damage, particularly from smaller fires. Removing and controlling the spread of invasive plant species – some of which are particularly flammable – can further reduce wildfire risks, particularly in areas that are at a high risk for ignition such as roadways.

The most effective approach for the central Puget Sound forests, experts say, is promoting forest diversity, complexity, and health, which is the focus of King County’s 30-Year Forest Plan.

As the region’s population grows, the chances of wildfire increase

The vast majority of wildfires in Washington – an estimated 85%, according to the state Department of Natural Resources – are started by people. That figure is likely higher in more densely populated areas, including King County. The Puget Sound Regional Council estimates that the population in the four-county area will increase by as much as 1.8 million people by 2050.

As the population grows, the number of fires ignited by human activity will increase.

King County and many of its cities have received multiple awards for effective growth management. Otherwise, the wildland-urban interface in King County would be significantly larger than it is today.

All King County residents are encouraged to sign up for ALERT King County, a regional public information and notification service offered by King County Emergency Management. Register at kingcounty.gov/alert.

As climate change increases the odds of a devastating wildfire occurring on our side of the Cascades, we are taking immediate action to better protect people, homes, and infrastructure. Our experts and partners have delivered a solid set of recommendations that will strengthen our region’s wildfire resilience, response, and recovery.

My family has lived in the wildland-urban interface in Issaquah and the Snoqualmie Valley for almost 30 years and it is so exciting to see the collective effort launching this first ever Wildfire Risk Reduction Strategy. The Federal, Tribal, State, County, City and private forests all around us are experiencing unprecedented heat and it is critical that we do all that we can to protect and preserve them, and to protect our infrastructure and our community members. This collective strategy with King County, the Snoqualmie and Tulalip Tribes, Eastside Fire & Rescue, the Snoqualmie and Duvall Fire Departments, and so many more is exactly what we need to meet this moment.

Our climate is changing rapidly and we know that Issaquah is vulnerable to its impacts. The science is definitive and our community has experienced more frequent and intense rain storms and flooding in the winters and hotter and dryer temperatures in the summers. As we undergo our own climate change vulnerability assessment, this important work of planning for wildfires is essential toward strengthening our community’s resiliency.

This strategy provides all of us with the proactive set of actions that will address the risks posed by wildfire in King County. Now is the time to do this work and King Conservation District is excited to continue working with our local, county, and regional partners under the guidance of this strategy to empower and support King County communities to reduce their wildfire risk and become more wildfire resilient.

The risk from wildfires in our area is increasing, due in large part to the effects of climate change. Therefore, we need to become even more diligent in our preparedness and response efforts. We encourage everyone, especially those in the wildland urban interface areas, to make a plan to evacuate, build a kit so you are ready when the time comes, and to stay informed of potential evacuations. One way is to sign up for ALERT King County, which is our emergency alerting system, at kingcounty.gov/alert.