This project identified the five types of landslide hazards in King County:

Examples of the various styles of deep-seated landslides identified using LiDAR are shown below.

Rock compound slides
A number of occurrences of this style of landslides were identified during this project, mostly in relatively weak Tertiary bedrock in the foothills of the Cascade Mountains. Several of these landslides are quite large, like the one shown in the figure below, with a total length of more than a mile (1.6 km). None of these identified landslides is known to be active although most are located in areas with little development where small movements might go unnoticed. 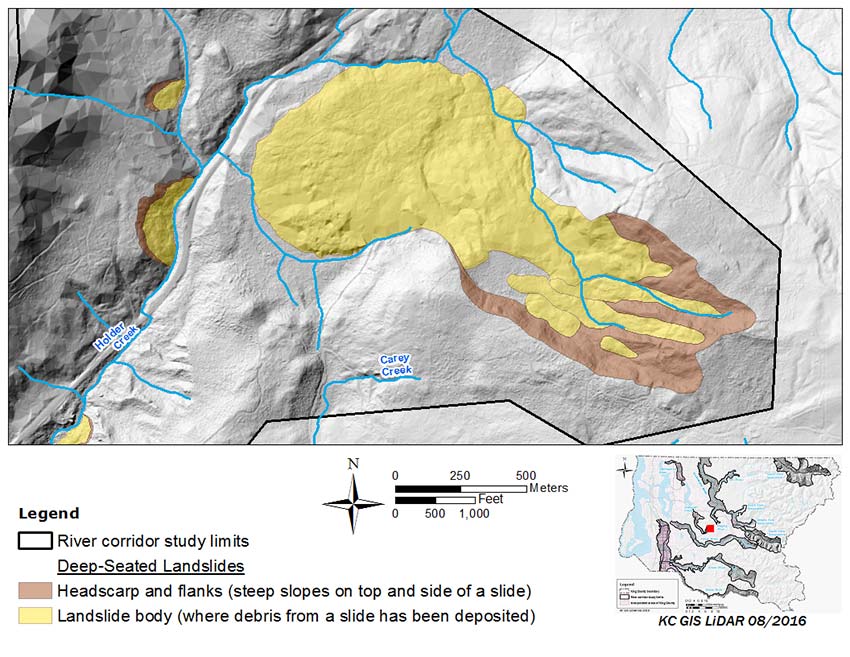 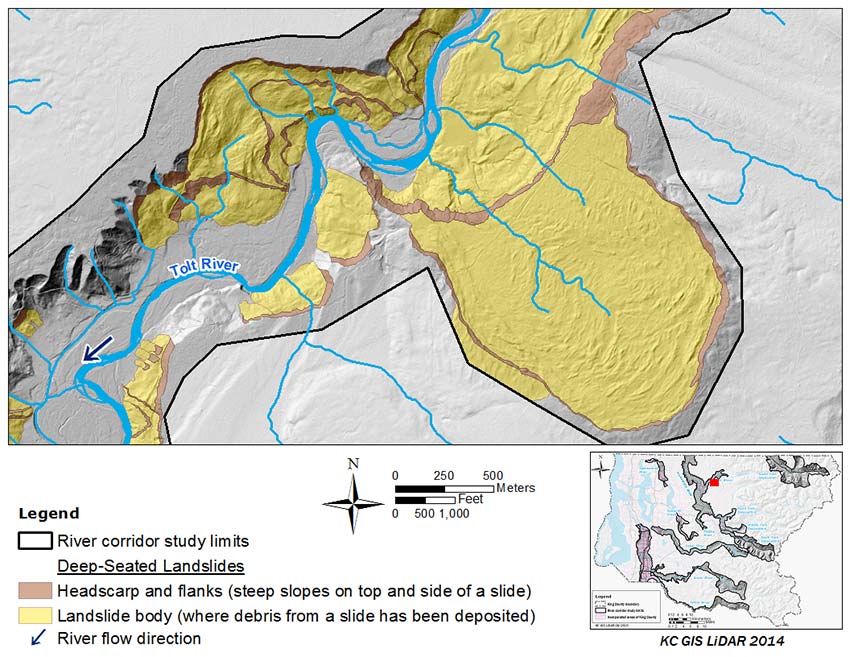 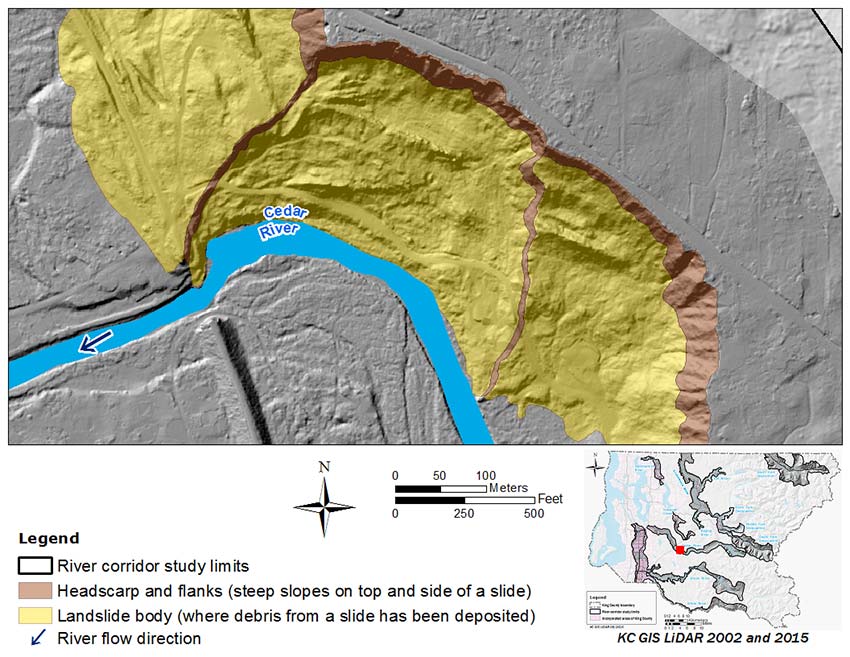 Debris flowslide
In a debris flowslide the debris that is displaced moves primarily in a fluid state. The figure below shows a series of flowslides located in the Cedar River Watershed. The ages of these slides are unknown, but they are geologically very young as they overlap (and therefore post-date) the entire suite of river terraces present here. The exact trigger for this assemblage of large, closely spaced landslides is unclear. 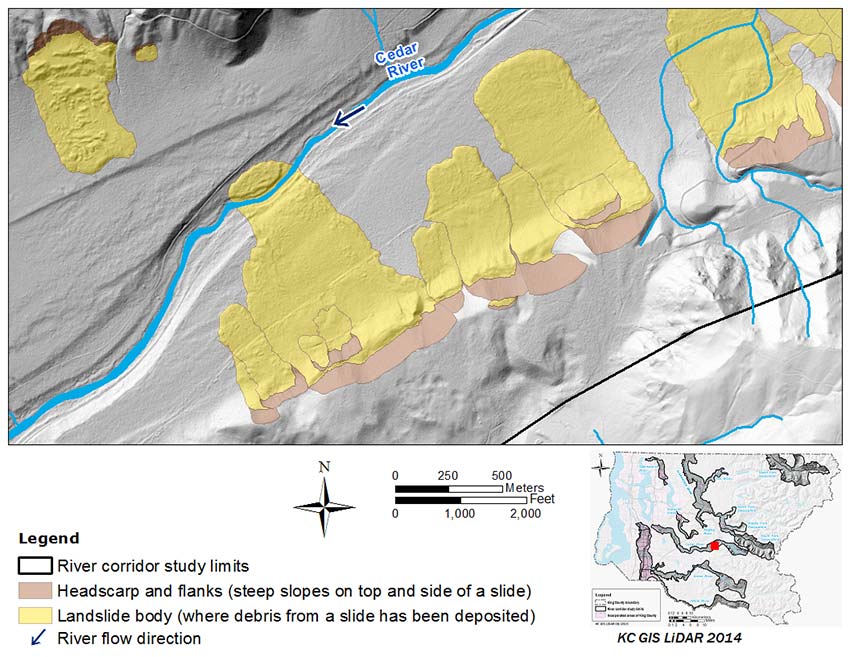 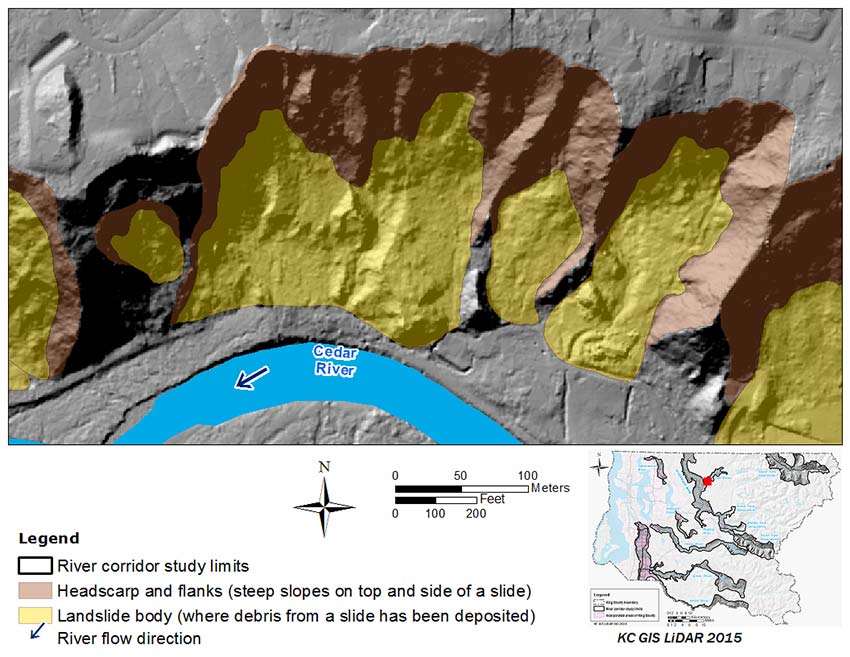 Shallow debris slides (also known as shallow landslides) are a common style of slope movement both in the Puget Lowland and Cascade Mountains. Shallow debris slides are characterized by failure of a relatively shallow layer of soil typically sliding on a surface of more competent material, either bedrock or dense glacial sediments. Shallow debris slides are typically 3 to 6 feet (1 to 2 meters) and translational. Shallow colluvial soils on slopes are formed through a variety of processes, including breaking up of the underlying in-place substrate (either bedrock or Quaternary sediments) by freeze/thaw, wetting/drying, bioturbation, and chemical weathering. Soils on steep slopes in King County vary significantly with respect to soil thickness, soil strength, and hydraulic properties; this variability presents the central challenge in assessing their stability across a landscape.

Although comparatively small in scale, shallow debris slides can occur on almost any steep slopes anywhere on the landscape. Because this type of landslide is shallow in depth and small in lateral extent, the debris often does not travel a long distance — unless it transitions into a debris flow. But the debris is typically saturated, can move quickly, and often carrying logs or entire trees. Impact and inundation by such debris can be highly destructive in the area of deposition.

Debris flows
Debris flows often begin as debris slides on steep slopes. If the debris has sufficiently high moisture content, it may liquefy as it is deformed and move downslope as flow. If it reaches a swale, it may continue down the swale as a slurry of water and sediment accumulating additional water and sediment from the swale as it progresses downward. Frequently, logs and other organic detritus are also incorporated into the flow. As the swale reaches the base of the slope there is often an abrupt decrease in the channel slope and sediment that had been entrained in the debris flow is deposited. Over time and with repeated debris flows from a given swale, sediment accumulates in a characteristic fan shape. Debris flows transport a wide range of sediment sizes up to and including large boulders.

In the Puget Lowland, debris flows can also be initiated when there is a sudden high flow of water in a steep channel. One common circumstance where this occurs entails sudden breaching of a beaver-dammed impoundment that releases a flow many times larger than that generated by meteorological events. This type of discharge often causes dramatic erosion and channel incision. Trees and organic detritus from adjacent slopes are often undermined and fall into the flow. 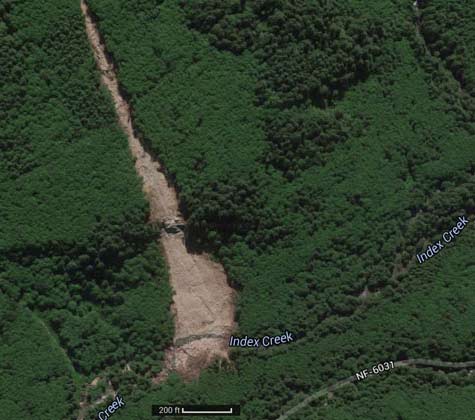 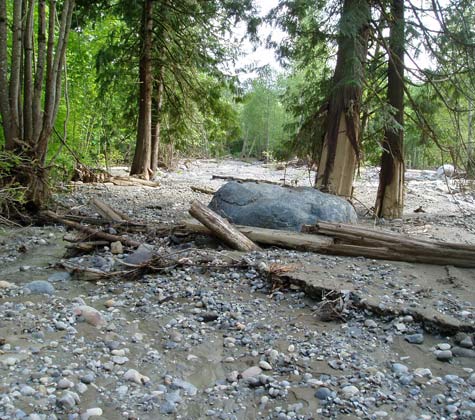 Debris floods
Debris floods are differentiated from debris flows by having a higher water content. Debris floods move smaller-sized sediment, carry less organic debris, and pose less of a safety risk as compared with debris flows. Debris floods are transitional to conventional fluvial flooding. The figure below shows a debris flood caused by a beaver dam failure in 2012 that flowed downslope through and around a home, and over the adjacent street. 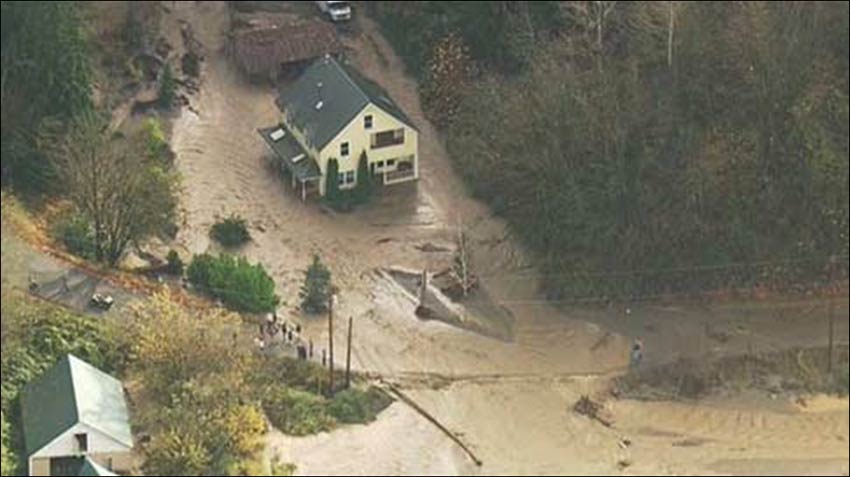 Rock fall is a type of landslide that occurs in bedrock where single or multiple rocks are dislodged and fall from steep cliff faces. In a typical alpine setting, cliffs are located on the upper slopes of a mountain with a talus below, extending to the base of the mountain (see figure "a" below). The talus is composed of rocks that have fallen from the cliff face and accumulate below the cliff. The talus marks the limit of most rock fall from the cliff, but a few boulders that fall from the cliff travel beyond the toe of the talus. It is these outliers that can pose a hazard to adjacent development (see figure "b" below). Rock fall can be triggered by earthquakes, freeze-thaw cycles, or severe weather. Tumbling boulders falling from a cliff face are fast moving and can level virtually anything in their path. 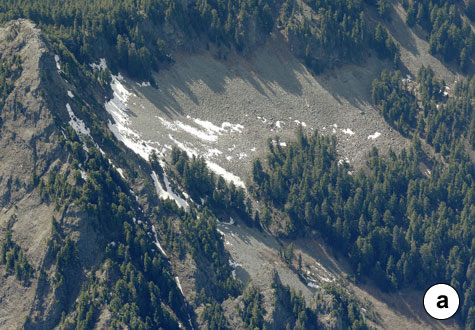 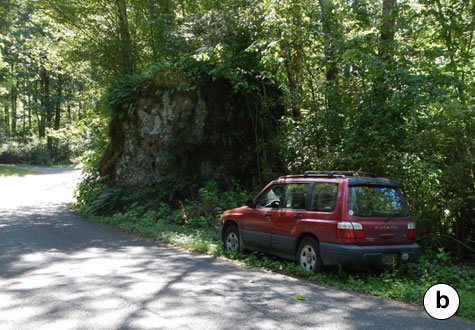 Rock avalanche is a style of landslide characterized by the simultaneous failure of an entire bedrock hillslope and with the dislodged mass cascading to the valley below. Rock avalanches move at extremely high speeds and are potentially massive in size. They can extend farther from the base of slope and cover a much larger area compared with individual rock fall.