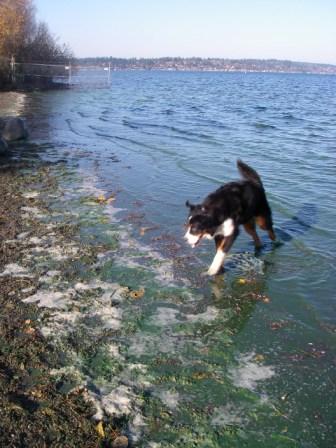 Light level, water temperature, and nutrient availability (most often phosphorus, but occasionally nitrogen) all affect the rate at which algae grow. In lakes Washington, Union, and Sammamish, high concentrations of nutrients can trigger algal growth. Both phosphorus and nitrogen can be found in animal and human waste (sewage), fertilizers, stormwater runoff, and even rainwater. The typical growing season for algae is much the same as your lawn and garden – the warmer, sunnier months from April through October.


What Is an Algae Bloom?

An algae bloom is the visible appearance of millions of algal cells in the water. Algae are extremely small and usually not visible to the human eye, but when there are abundant nutrients algae can reproduce very quickly and grow to such large numbers that we can see masses of cells in the water. Algal blooms can be green, brown, or blue-ish in color and are can take on the appearance of water cloudiness, floating scums, stringy mats, or underwater towers of slime.

In King County, certain lakes produce algal bloom nuisances every year, while others may have a problem only sporadically. Different species of algae can be responsible for producing nuisance blooms, and the health and safety risks that accompany their success varies with the type that wins the summer growth competition.

Some algal species produce toxins, and when these species bloom their presence can present potential health risks to people and animals. The Washington State Toxic Algae Program provides identification and toxicity testing services to citizens and groups who are concerned about potentially toxic algal blooms.

If an algae mass is stringy or can be picked up and handled, it is likely filamentous green algae. Accumulations of filamentous green algae (Oedogonium and Spirogyra) have been observed at swimming beaches on lakes Washington and Sammamish. Both of these green algae are common, and often grow as filaments attached to rocks and the bottom substrate. Accumulations along the shoreline occur when the filaments have grown long enough to be broken off by wind and wave action. Green algae can also appear as floating cushions or mats. 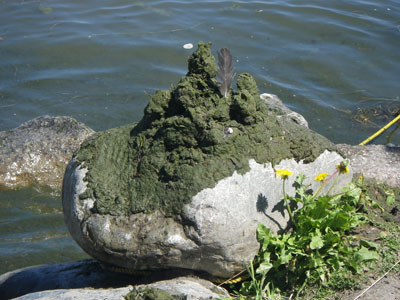 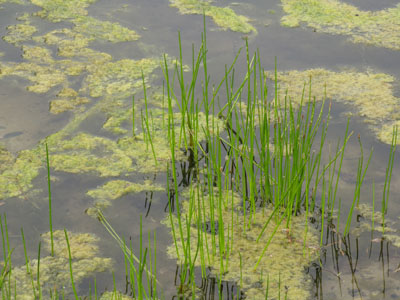 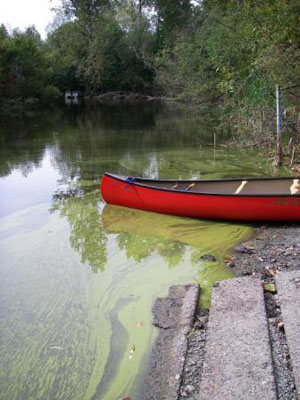 Bluegreen algae, or cyanobacteria, are simple life forms closely related to bacteria that resemble true algae. When conditions are right, cyanobacteria will bloom are can turn lake water turbid with green, blue-green, or reddish-brown colored algae. Some blooms will form a thin, oily looking film or scum on the surface of the lake. The film can look like a paint spill, as shown in this picture of Shadow Lake.

Cyanobacteria can produce toxins that are potentially lethal to people and animals. Some cyanobacteria produce liver toxins and other produce neurotoxins, which can manifest from minutes to days after exposure. In humans, symptoms may include numbness of the lips, tingling in fingers in toes, and dizziness. Liver toxin poisoning may take hours or days for symptoms to appear. Symptoms of liver toxin exposure include pain, diarrhea and vomiting in humans, and death in animals. Symptoms from neurotoxin exposure in animals include weakness, staggering, difficulty in breathing, and convulsions. For more information about toxic cyanobacteria, visit the Washington State Toxic Algae Program website.

In the fall of 1997, a toxic bloom of Microcystis aeruginosa in Lake Sammamish led to partial advisories at Lake Sammamish State Park, Idylwood Park, and Marymoor Park. An extensive study conducted in 1999 revealed a toxin producing bloom despite the absence of a visible accumulation of cyanobacteria. Green Lake was closed due to a toxic algae bloom in 1999. These events prompted the King County Science and Technical Support Section to include cyanotoxin monitoring as part of its Swimming Beach Monitoring Program. This cyanotoxin monitoring effort is conducted at each of the routinely monitored swimming beaches. Samples are collected weekly from May through October.

King County's Cyanotoxin Monitoring Program takes a proactive approach by testing for toxins both routinely and when cyanobacteria blooms or scums appear at public beaches. Working with Seattle-King County Public Health, signs are posted at beaches when cyanotoxins are measured at significant levels.

Additionally, the King County Science Section is playing a major role in the regional monitoring of toxic algae. From 2009 through 2012, King County, in conjunction with the Washington State Department of Ecology, the Washington State Department of Health, and Snohomish and Pierce counties, participated in a tri-county project to understand and quantify the extent of toxic cyanobacteria blooms in local lakes. This project was funded through a grant from the Center for Disease Control (CDC).

King County's participation in these cyanotoxicity monitoring efforts will provide decision-makers with information and recommendations regarding recreational water use during cyanobacterial blooms and will lead to improved management of county lakes for the protection of human health.

In 2005, the Washington State Legislature established funding for a Freshwater Algae Control Program (RCW 43.21A.667) through the Department of Ecology to assist local governments in the management of freshwater algae problems. As part of this program the Department of Ecology partnered with the Washington State Department of Health (WaDOH) to develop recreational guideline values for cyanotoxins. WaDOH has recommended a three-tiered approach using the recreational guidance values of 8.0 µg/L microcystin and 1.0 µg/L anatoxin-a for managing Washington lakes (WaDOH, May 2008).